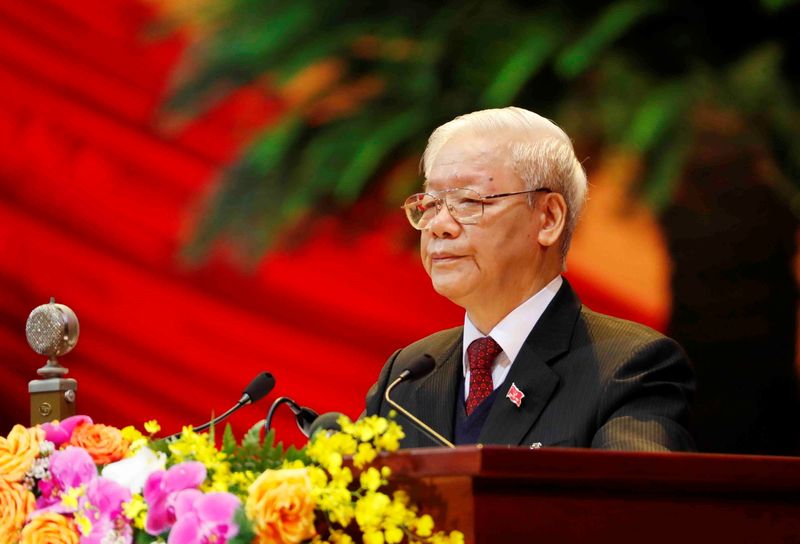 FILE PHOTO: Vietnam's General Secretary of the Communist Party Nguyen Phu Trong speaks at the opening ceremony of the 13th national congress of the ruling communist party of Vietnam is seen at the National Convention Center in Hanoi, Vietnam January 26, 2

HANOI (Reuters) - Nguyen Phu Trong, re-elected as Vietnam's most powerful man on Sunday, is one of the Southeast Asian country's strongest and longest-serving leaders since founding revolutionary Ho Chi Minh.

Trong, 76, winning a rare third term as general secretary of the ruling Communist Party at a five-yearly party congress, combines decades at the pinnacles of power with the cultivated image of a frugal wordsmith serving the nation of 98 million people.

Famed for his "blazing furnace" crackdown on corruption, Trong's Communist Party has also been criticised by human rights groups for a crackdown on dissent.

Frail but in strong command for now, the committed Marxist-Leninist becomes Vietnam's longest-serving party chief since Le Duan, who ruled with an iron fist after the 1969 death of "Uncle Ho".

Trong's rise and long rule stand in contrast with a trend of greater power sharing among the country's top four leaders since the "Doi Moi" reforms of the 1980s that transformed Vietnam from a war-torn agrarian basket case into one of Asia's fastest-growing economies.

Trong's post of party chief eclipses the other three - president, prime minister and National Assembly chair. Trong has also held the largely ceremonial role of Vietnam's president since his predecessor died in 2018.

He emerged on top in a power struggle with former prime minister Nguyen Tan Dung at the last party congress in 2016 and has since presided over an intense crackdown on corruption that has seen the jailing of dozens of high-ranking officials, including a politburo member.

Critics say the crackdown, which has targeted many of Dung's allies, is politically motivated. Rights groups have criticised Trong for presiding over an intensified muzzling of dissent.

The language used by the party to describe its chief has changed under Trong, analysts say.

In 2019, the party released a book about him called "General Secretary and State President Nguyen Phu Trong: With the feelings of the people in the country and international friends".

Across 600 pages, it speaks of Trong as an "intelligent, brave and pure leader" striving to bring Vietnam "shoulder to shoulder with the powers of the five continents, as Uncle Ho respectfully wished", the book's prelude says.

"I haven't seen such language used about any other leader since the days of Ho Chi Minh," said Linh Nguyen, a Singapore-based analyst at risk consultancy Control Risks. "It is a cult of personality under construction."

Trong has called for better party discipline and for stamping out corruption in its ranks.

A poem in the book describes Trong as "a noble man, sent by the spirits to purify the system," an apparent reference to the corruption crackdown. "Hammer and sickle in hand, he dispels gloom, waiting for the sunshine."

Securing a third term implies that other party factions do not view Trong as a threat to their long-term race to power, said Nguyen at Control Risks. "He can be a kind of compromise figure," she said.

There were times during Trong's second term where the future of his rule seemed uncertain. He disappeared from public view for nearly a month in 2019 with an undisclosed illness. He has since appeared visibly frail at official meetings and often requires assistance to walk but has maintained his command of the party and outmanoeuvred rivals.

He has also demonstrated mental strength, delivering a wide-ranging 78-minute speech at the opening of the party congress last week.

From a young age, Trong was interested in folk literature, according to a biography posted to the website of Vietnam National University, where one of his first published works - a 1967 review of folk poetry - is on display.

He once dreamed of a career in literature or journalism, according to the biography, an ambition he realised in 1991 when he became editor-in-chief of the party's Communist Review magazine after a stint in the Soviet Union.

Although Trong occasionally works in the colonial-era presidential mansion, he lives in modest, state-appointed housing. His official image is that of a man who detests excess, refusing expensive Lunar New Year gifts from friends, and who in the past rode to work on a Honda Dream - one of Vietnam's most popular workhorse motorbikes.

"He's a sincere person. Not noisy, but profound," Vu Mao, the late chairman of Vietnam's National Assembly, told Reuters in a 2018 interview.

True to the image that the party has carefully created, Mao described Trong as a quiet, modest man who enjoyed singing in Russian when they met. He expressed doubt about Trong's preference for riding a motorbike, however.

"It's not that extreme. It's not safe for him to ride a motorbike," Mao said. "I think people made it up to paint a good picture of him."

(This story corrects date of book publication in paragraph 10)