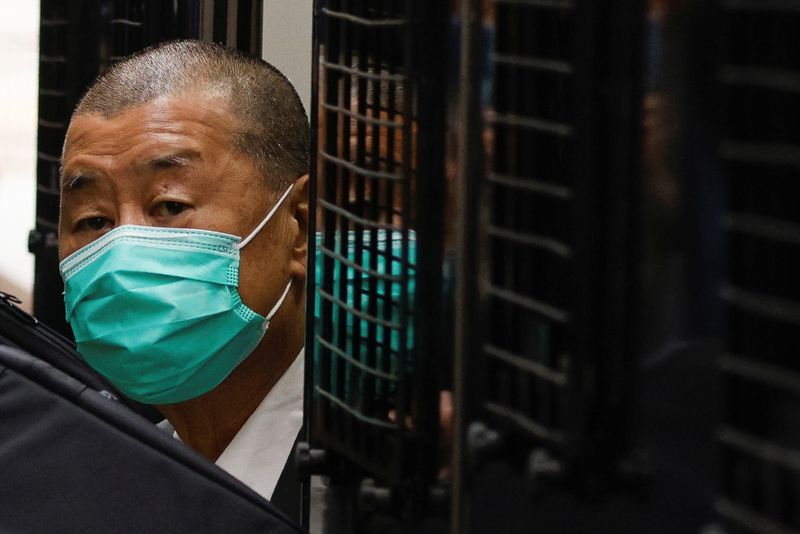 By Donny Kwok and James Pomfret

HONG KONG (Reuters) - Next Digital Ltd shares were suspended on Monday after authorities froze assets of its jailed owner Jimmy Lai under a new national security law in Hong Kong, while the tycoon pleaded guilty to taking part in an illegal protest in October 2019.

The shares will remain on a trading halt ahead of a company announcement regarding the freeze in Lai's assets, including his majority stake in the pro-democracy media publisher, Next Digital said.

The move against Lai's assets has raised worries about the future of Next Digital, which he has been keeping afloat with loans, although the company's CEO has said that the frozen assets have no link with its bank accounts.

Given this is the first time a listed firm has been targeted under the new security law imposed by China in 2020, it also fuels concerns about the broader investment environment in the Asian financial hub.

Lai, a democracy activist and staunch Beijing critic, was sentenced to 14 months in prison for taking part in unauthorised assemblies during anti-government protests in Hong Kong in 2019, and is among the most high profile arrests made under the security law. He faces three alleged charges under the new law, including collusion with a foreign country.

Lai and nine other activists pleaded guilty in the District Court to charges of organising an unauthorised assembly on Oct. 1, 2019, China's national day, as a trial began on Monday.

Sentencing is expected on May 28.

But the freeze of assets belonging to Lai will not affect company operations as the frozen assets have nothing to do with Next Digital's bank accounts, CEO Cheung Kim-hung told the Apple Daily newspaper.

A senior management source at Apple Daily told Reuters last week, before the asset freeze was announced on Friday, that the group had tried to "firewall" its media operations from Lai's other businesses, but they believed authorities still had ways to "neuter" the paper, without elaborating.

Without fresh cash injections, Next Digital can only survive another nine or 10 months, Apple Daily cautioned on Saturday.

A shareholder's loan of HK$756 million, of which HK$500 million had been drawn as of end-September, was an "important source of funding" and may not be available anymore given the freeze, the paper added.

The group's bank borrowings amounted to HK$262.3 million as of end-September, repayable within three years. Its net cash position was HK$228.7 million at the time.

Authorities say media freedom is intact, but have warned China's national security is a red line.

Officials have criticised Apple Daily's coverage and flagged the introduction of a "fake news" law.

"I just hope that you know our friends outside can withstand the continuing oppression that we are witnessing in Hong Kong, especially with the media," Avery Ng, one of the 10 defendants in Monday's illegal assembly trial, said before entering court.