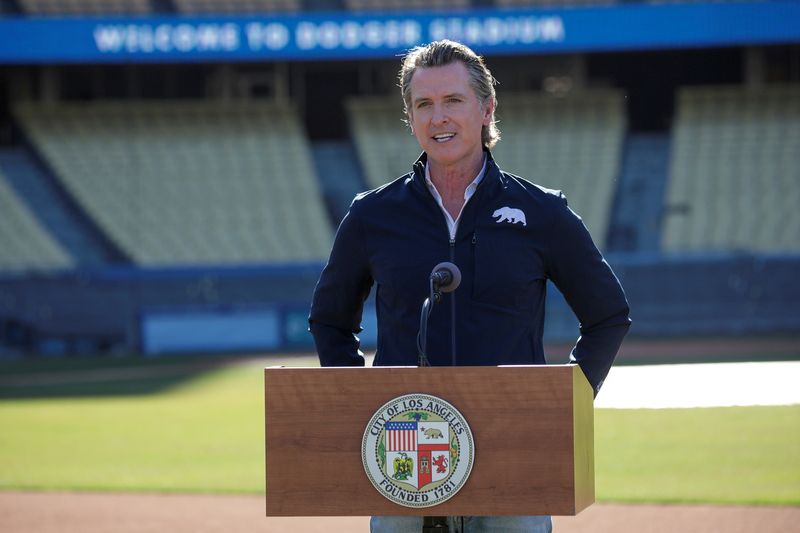 Joint plans to launch the two sites on Feb. 16, at the Oakland-Alameda Coliseum in Oakland and the California State University campus in east Los Angeles, were detailed separately on Wednesday by Governor Gavin Newsom and the Biden administration's COVID-19 response coordinator, Jeff Zients.

The two sites, which the state's Department of Health said will be capable of administering several thousand shots per day each, mark the first of more than 100 such vaccination centers expected to be established in communities of color across the United States, according to Newsom.

"Equity is the call of this moment," Newsom told reporters outside the Oakland coliseum. "The reason this site was chosen was the framework of making sure that communities that are often left behind are not left behind."

Black and Hispanic populations, overly represented among the working poor and accounting for a large share of high-risk jobs in food service, factories, warehouses and healthcare, have been ravaged by the pandemic.

They also suffer disproportionately from chronic underlying health conditions, such as diabetes and heart disease, that put them at higher risk of severe illness if infected by the coronavirus.

Their risk of exposure, and the risk of transmitting the virus to others, is further amplified by rampant overcrowded housing in the greater Los Angeles and the San Francisco Bay areas, where multi-generational households frequently live in cramped conditions.

Public health experts have pointed to extreme overcrowding in Los Angeles housing as a primary factor driving the year-end wave of infections that turned Southern California into a U.S. epicenter of the pandemic.

Moreover, skepticism about the safety of vaccines runs particularly deep in minority and working-class communities long distrustful of government authorities and lacking access to healthcare services.

The race to achieve collective immunity through widespread vaccinations has grown increasingly urgent with the advent of more highly transmissible coronavirus variants, some of which may also be partially resistant to vaccines.

While rates of COVID-19 infections, hospitalizations and deaths have leveled off in the United States in recent weeks, case loads and mortality remain high.

The United States has reported 26.5 million known coronavirus infections to date, with nearly 450,000 proving fatal as of Wednesday.

President Joe Biden last month branded the nation's COVID-19 immunization launch a "dismal failure," citing what he called a lack of detailed planning by the Trump administration that left the states to largely fend for themselves.

Biden has vowed to accelerate immunizations, with a focus on ensuring equitable access.

The United States has administered over 32 million doses of COVID-19 vaccine so far, according to a Reuters tally. Newsom said California is averaging more than 1 million shots weekly and would increase that pace.

But a study this week found that Blacks and Hispanics had received a smaller proportion of shots than their representation among healthcare workers and nursing home residents.

The two vaccination centers opening in Oakland and Los Angeles will be staffed and equipped largely by the Federal Emergency Management Agency (FEMA), setting them apart from existing county-run inoculation sites.

"These (FEMA) sites in California are just the beginning," Zients told reporters. "We are working with, in partnership in states across the country, to stand up new sites."

The White House on Tuesday said it would start shipping vaccines directly to retail pharmacies alongside ongoing deliveries to states, increasing weekly supplies of shots nationwide to 11.5 million.

(Reporting and writing by Steve Gorman in Los Angeles; Additional reporting by Jarrett Renshaw in Philadelphia; Editing by Rosalba O'Brien and John Stonestreet)