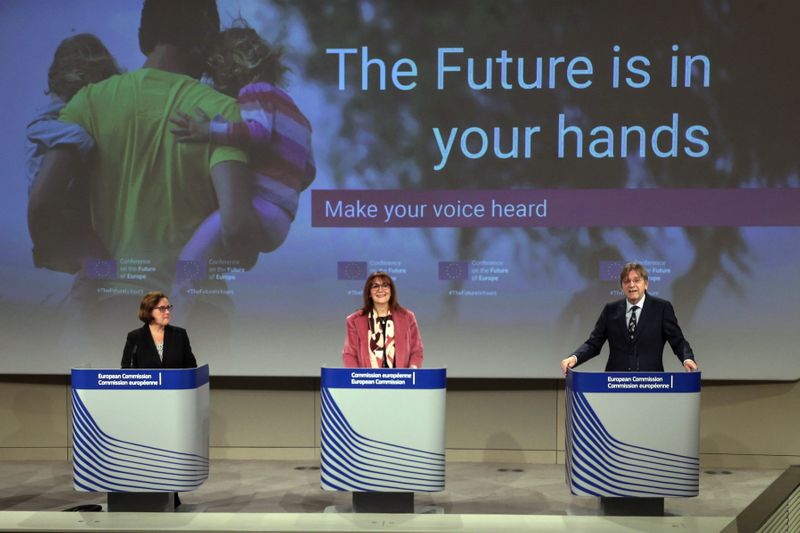 Portuguese secretary of state Ana Paula Zacarias, EU Parliament's Guy Verhofstadt and European Commissioner for Democracy and Demography Dubravka Suica attend the opening of the Conference on the Future of Europe, in Brussels, Belgium April 19, 2021. Fra

BRUSSELS (Reuters) - The European Union launched on Monday a website for citizens to debate the future of the 27-nation bloc as the exit of Britain, climate change, the COVID-19 pandemic and the rise of nationalism force the EU to reflect on how it wants to develop.

The website, available for contributions in the EU's 24 official languages, is part of what EU institutions call the Conference on the Future of Europe -- a forum for debate to help identify issues the EU needs to address in the changing global context.

"The conclusions of the conference could be the backbone for reforms in the Union in the future," one of the leaders of the initiative, member of European Parliament and former Belgian Prime Minister Guy Verhofstadt told a news conference.

"A new direction is needed. This conference can give an answer to that," he said. Conclusions from the discussions are to be presented in the second quarter of 2022.

The website prompts debates on subjects including climate change, the environment, health, the economy, social justice and jobs, the role of the EU in the world, values and rights, the rule of law, security, digital transformation, democracy and migration. Citizens can also launch their own topics.

"We want to come closer to citizens, to listen to them," Commission Vice President for Democracy and Demography Dubravka Suica said. "We want to hear from everyone."

After starting in 1951 as an organisation of six countries to jointly regulate their industrial production, or what was then called the European Coal and Steel Community, the EU has since expanded to 28 countries in 2013 and shrunk back to 27 last year with the exit of Britain.

In the past 70 years, the challenges the bloc faces have changed as well. Rather than coordinate coal and steel output, or tackling the problems of post World War II Europe, the 27 countries now coordinate cuts in CO2 emissions to prevent climate change or the joint procurement of vaccines against the COVID-19 pandemic.

The website is the first EU attempt to listen to its citizens directly at a trans-national level, building on the experience of such exercises at country level, notably in France.

While some EU institutions and officials believe that it is not realistic to expect that the debate will produce changes in the EU treaties -- the primary law of the Union -- the option has not been explicitly excluded.