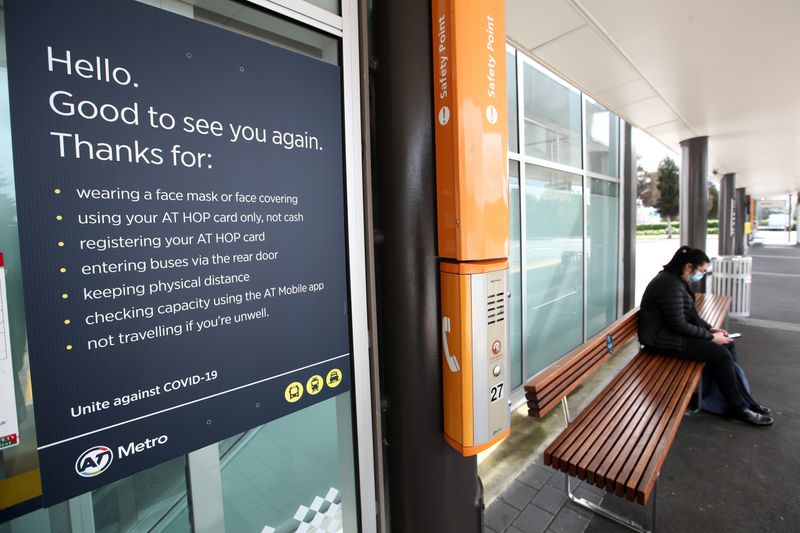 A person wearing a face mask sits at a bus stop next to posted safety guidelines on the first day of New Zealand's new coronavirus disease (COVID-19) safety measure that mandates wearing of a mask on public transport, in Auckland, New Zealand, August 31,

WELLINGTON (Reuters) - New Zealand health officials said on Sunday they were investigating what they said was probably the country's first community coronavirus case, in months in a woman who recently returned from overseas.

The 56-year-old, who returned to New Zealand on Dec. 30, tested positive for the virus that causes COVID-19 days after leaving a two-week mandatory quarantine at the border where she had twice tested negative.

"We are working under the assumptions that this is a positive case and that it is a more transmissible variant, either the one identified first in South Africa or the UK, or potentially Brazil - or another transmissible variant," Director-General of Health Ashley Bloomfield told a news conference.

It is not known how the woman was infected or whether the infection is new, Bloomfield said. But since the woman tested positive several days after being released from quarantine and has been at home, the authorities are treating it as a "probable community case".

New Zealand, one of the most successful developed nations in controlling the spread of the pandemic, last recorded a community coronavirus transmission on Nov. 18, according to the Health Ministry website.

The country of 5 million people has had only 1,927 confirmed cases. But with the pandemic raging globally, more people are returning to New Zealand with infections, including the new variants, raising concerns the virus may spread in the community again.

The woman, who lives in Northland on New Zealand's North Island, quarantined upon arrival in a managed isolation facility in Auckland where several the highly virulent COVID-19 cases have been recorded in recent weeks, Bloomfield said.

"This is a reminder to all of us that the pandemic continues and that this is a tricky virus," he said.

Social media users rushed to express concern and frustration about the new case, with one user describing the reactions on Twitter as a "collective groan".

On Sunday, there were eight new infections, all returning travellers quarantined at the border, bringing active cases among those quarantined to 79, the ministry said in a statement.

Pressure has been mounting on Prime Minister Jacinda Ardern's government to vaccinate the population, but New Zealand has said the majority of its population would only be vaccinated in the second half of the year.

(Reporting in Wellington by Praveen Menon; Writing by Lidia Kelly in Melbourne; Editing by Richard Chang and William Mallard)