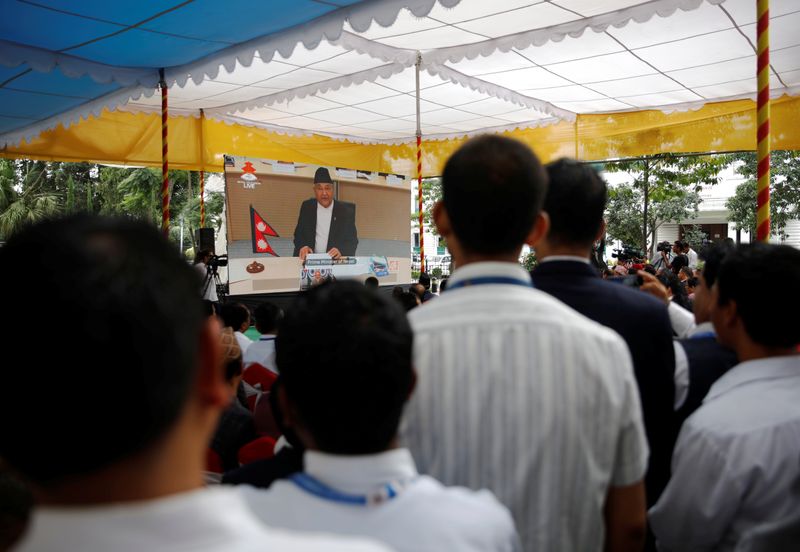 FILE PHOTO: People watch the live broadcast on a screen as Nepal's Prime Minister Khadga Prasad Sharma Oli, also known as K.P. Oli, delivers a speech during the inauguration of the Motihari-Amlekhganj petroleum pipeline project through a video conference

The contempt of court suits are the latest challenges for the beleaguered leader after being expelled from his party earlier this week.

The Supreme Court judges are dealing with more than a dozen petitions against Oli's surprise move in December last year to dissolve the parliament and call fresh elections a year ahead of schedule, a move that has triggered nation wide protests amid the coronavirus pandemic and plunged the young Himalayan republic into a political crisis.

Despite protests, Oli at a public function last week, questioned the involvement of a 94-year-old lawyer Krishna Prasad Bhandari in petitions filed against his political decision.

Bhandari had earlier stated before the court that the leader (Oli) had no prerogative to dissolve the parliament and had acted unconstitutionally.

This week two lawyers filed contempt cases against Oli for making statements which they deemed were "a direct insult" to the legal fraternity.

Oli's lawyer Ramesh Badal said the leader was yet to get a communication from the court.

"Once the formal letter comes he (Oli) will reply accordingly," Badal told Reuters.

Oli has justified the dissolution saying the ruling Nepal Communist Party had not cooperated with the government in policy decisions, while his opponents say he had ignored the party decision and abruptly dissolved the parliament instead of sorting out differences with party colleagues.

The court is expected to give its verdict in February.