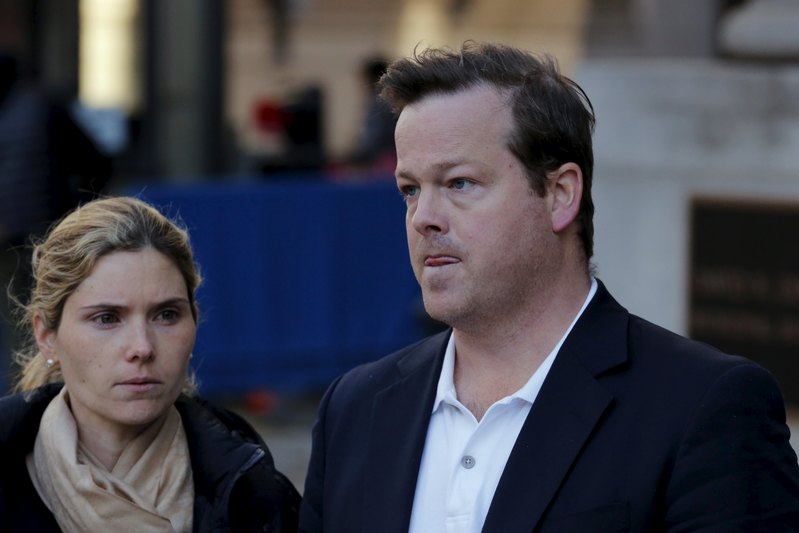 NEW YORK (Reuters) - A former partner at a unit of boutique investment bank PJT Partners Inc has been arrested on charges that he stole $25 million from investors and tried to fraudulently obtain $70 million more, U.S. prosecutors said on Monday.

Andrew Caspersen, who had worked at PJT's Park Hill Group since 2013, was named in a criminal complaint filed in federal court in Manhattan, charging him with securities fraud and wire fraud.

Prosecutors said Caspersen, 39, sought $24.6 million from a charitable foundation affiliated with a New York hedge fund along with $400,000 from one of the fund's employees, saying he would invest it in a secured loan to a private equity fund.

Instead, Caspersen used the money for personal options trading, losing $14.5 million in the process, authorities said. Other funds went to cover up unauthorized wire transfers at his company, the complaint said.

The fraud, which involved creating fake email addresses and a misleading domain name, began in July and continued through this month, when he sought $20 million more from the foundation and $50 million from a private equity firm, prosecutors said

During this time he worked at Park Hill, which he joined in 2013. The advisory firm was spun out of private equity group Blackstone Group LP in October. It is now part of PJT Partners, founded by veteran dealmaker Paul Taubman.

Shares in PJT closed down 10.62 percent on Monday, after dropping as much as 24.3 percent to a record low earlier in the day on news of the charges.

"Looking at it from the outside, it looks like it was just a bad apple as opposed to some kind of a systemic problem," said Jeffery Harte, an equity analyst at Sandler O'Neill + Partners LP. "But I suspect people will ask how do we know this won't happen again."

PJT said it was "stunned and outraged" by Caspersen's actions and said it fired him. Both it and Blackstone said they were cooperating with authorities.

Caspersen was arrested on Saturday and released on a $5 million bond following a court hearing on Monday, where a prosecutor argued that his wealth should require bail to be set even higher, at $20 million.

A graduate of a Princeton University and Harvard Law School, Caspersen is the son of Finn M.W. Caspersen, the former chairman of consumer finance company Beneficial Corp, which Household International Inc bought in 1998.

The elder Caspersen committed suicide in 2009 amid an Internal Revenue Service investigation. In court, Assistant U.S. Attorney Cristine Magdo said his net worth once was $1 billion.

Magdo referred to that wealth along with stolen funds that continue to be unaccounted for in arguing Caspersen could pose a flight risk. But Daniel Levy, his lawyer, played down those claims and said his father died in debt.

"There's no secret pot of money Mr. Caspersen has access to and can tap into," he said.

Caspersen, who Levy described as "a daily alcohol user," was ordered by U.S. Magistrate Judge James Francis to seek mental health treatment in light of what Levy referred vaguely to as recent "thoughts." Levy declined comment outside of court.