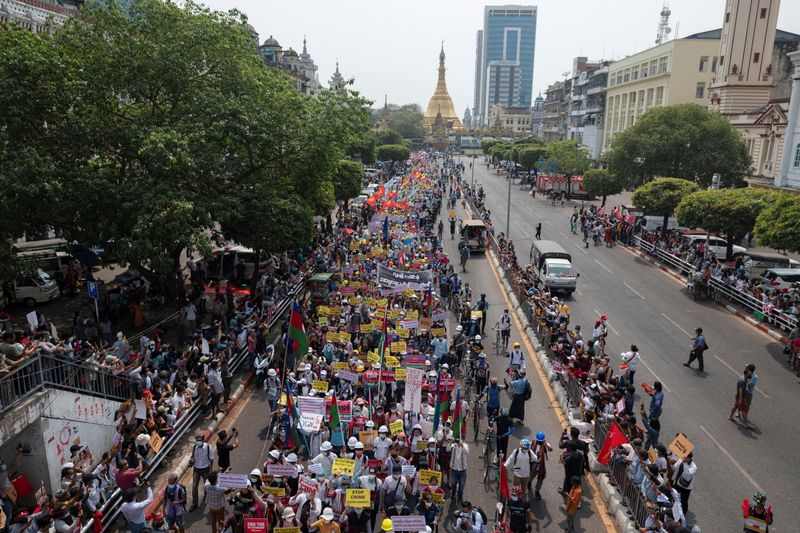 SINGAPORE (Reuters) - Myanmar's refined fuel imports have stalled as protests over the military coup have shut banks and government offices, while a depreciation of its currency has driven up costs, five industry sources said.

Myanmar relies heavily on gasoline and diesel imports as its refineries are too small and old to meet its fuel needs. One source said imports may make up as much as 98% of Myanmar's fuel consumption.

"The economy is almost at a standstill. Almost all government ministries are closed," the source said. "Fuel supply is running low. (The country) might run out of oil in two months."

Reuters was unable to reach Myanmar government officials for comment. The five sources declined to be named due to the sensitive nature of the topic.

Tens of thousands of protesters have taken to the streets to denounce the coup that ousted the democratically elected government on Feb.1. A civil disobedience movement that calls on people not to go to work has also paralysed government, business and banking functions.

"One of the main problems is (the movement) telling people, 'Don't go to work'. So banks are shut and there's nobody there," another of the sources said.

The first source said banks have stopped processing payments and the customs and commerce offices that process import taxes and permits are not fully functioning.

A spokeswoman for Japan's Mizuho Bank said it has not closed its Myanmar branches or stopped operations there, although it was not clear what services it was offering.

"But most don't have more shipments arriving anymore," he added.

Puma Energy - whose main shareholders are commodity trader Trafigura and Sonangol Holdings - said on Feb. 10 that its terminal had been shut. PetroChina did not respond to a Reuters query on the status of its operations in Myanmar.

LOCAL FUEL PRICES UP A THIRD

Oil trading companies have also become more cautious in supplying fuel to Myanmar amid the political and economic upheaval and as a sharp drop in the value of the local currency helped to drive up importers' costs.

The kyat has lost 6.5% against the U.S. dollar since the start of February, Refinitiv data showed, and local gasoline and diesel prices have risen by about a third since end-January.

Myanmar's oil importers used to be given credit terms of up to 90 days by having their banks issue letters of credit (LCs), but fuel suppliers are no longer accepting LCs from Myanmar companies, the sources said.

They have instead asked for telegraphic payment in advance, the sources said, although this is not possible without banks.

One source said they were trying to look for sources of U.S. dollar offshore from people who are willing to accept Myanmar kyats in Myanmar.

"Until banks open it's not easy for anyone to perform their trades," a fourth source said.