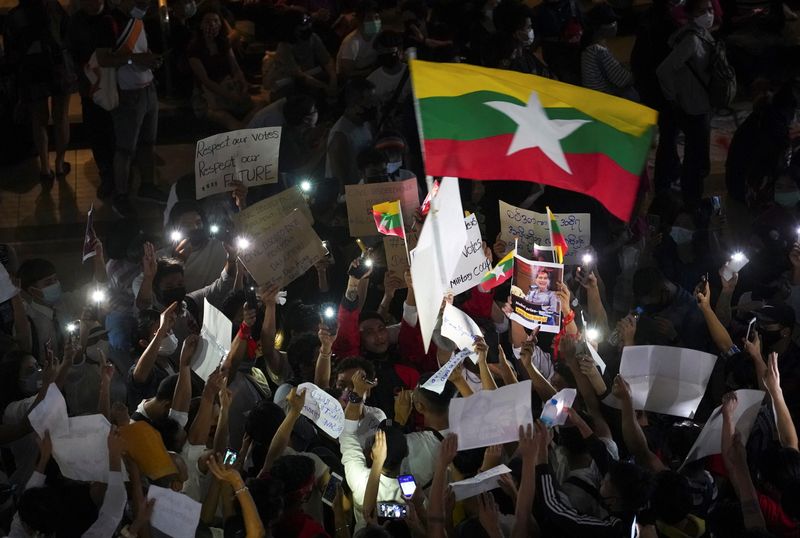 Myanmar citizens hold placards as they take part in a protest against the military coup in Myanmar at Bangkok's shopping district, Thailand, February 10, 2021. REUTERS/Athit Perawongmetha

GENEVA (Reuters) - The United Nations' top human rights body is to consider a resolution on Friday drafted by Britain and the European Union that would condemn Myanmar's military coup and demand urgent access for monitors, a text seen by Reuters shows.

However, diplomats said Human Rights Council members China and Russia - who both have ties to Myanmar's armed forces - are expected to raise objections or try to weaken the text.

Procedural wrangling began on Monday, with Beijing and Moscow raising objections over virtual voting as officials met to plan both the council's four-week session from Feb. 22 and Friday's special session on Myanmar.

The U.N. Security Council last week called for the release of elected leader Aung San Suu Kyi and others detained by the military but stopped short of condemning the coup.

Protesters took to the streets for a fifth day on Wednesday, vowing to keep up demonstrations against the coup even after a woman was shot and critically wounded.

"It's only a matter of time until there is a big-scale confrontation," a U.N. official told Reuters of the protests.

The request by Britain and the EU received formal support from 19 members, including Myanmar's fellow Asian nations Japan and South Korea, at the 47-member forum.

"We have to keep up the pressure," a European diplomat said.

The United States, which backed convening Friday's session, is imposing new sanctions on those behind the coup and any linked entities.

The draft resolution condemns the ousting of the civilian government and calls for its restoration and the unconditional release of those "arbitrarily detained". It urges the military to refrain from using violence against peaceful protesters, while ensuring freedom of expression and an open internet.

Thomas Andrews, the U.N. investigator on human rights in Myanmar, should be granted urgent, unrestricted access, it says.

Andrews, in a statement on Wednesday, said security forces and police have a duty to refrain from using excessive force against peaceful demonstrators and that "following orders is no defence for committing atrocities".