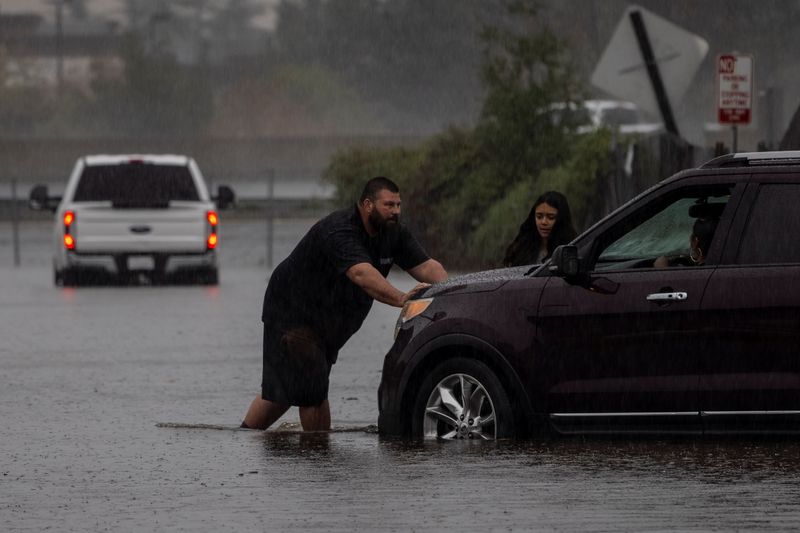 A couple pushes a vehicle away from a flooded area as a powerful storm drenched northern California in Fairfield, California, U.S. October 24, 2021. REUTERS/Carlos Barria

Up to 10 inches (25 cm) of rain were expected to wash over the West Coast, said meteorologist Marc Chenard of the Weather Prediction Center at the National Weather Service.

"It's an atmospheric river already moving through Northern California," he added, describing the storm as a "bomb cyclone," an intense weather event when the barometric pressure drops quickly.

The storm follows the busiest wildfire season in California history and heightens threats of flash flooding. Much of the region is in severe, extreme or exceptional drought, as classified by the U.S. Drought Monitor.

"Burn scars, that's the area where the water tends to run off quicker, so that's where the biggest flash-flood risks are," Chenard said. "Warnings are of life-threatening flash flooding in and around the burn scars."

Multiple mudslides were already reported in some of the 570,000 acres (230,670 hectares) blackened by the Dixie Fire in the Sierra Nevada mountains northeast of San Francisco, the second-largest wildfire recorded in state history, he said.

The area of Central California where the 2020 Creek Fire ripped through was placed under evacuation warning status, the Fresno County Sheriff's Office tweeted.

Winds over 50 miles per hour (80 kph) gusted through San Francisco and triggered power outages around Sacramento, where residents tweeted photographs of toppled utility poles smashing cars and blocking roadways. As much as 5 inches (13 cm) of rain was predicted.

Sandbags were being handed out and evacuation centers were opened in the state capital, Sacramento. The Sacramento Office of Emergency Service tweeted: "Remember - never drive through standing water! Turn around, don't drown!"

"It's a pretty impressive storm system," Chenard said. "It's happening now and it's going to continue into the day tomorrow. It will be gradually shifting southward across Central California tonight and tomorrow."