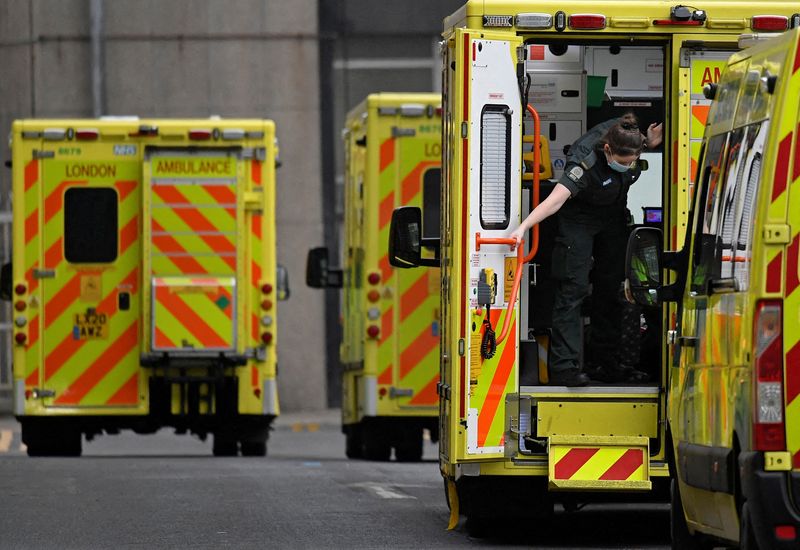 FILE PHOTO: A health worker closes the door of an ambulance outside of the Royal London Hospital, amid the coronavirus disease (COVID-19) pandemic in London, Britain, January 7, 2022. REUTERS/Toby Melville

LONDON (Reuters) - People with mild COVID-19 who do not suffer any other traditional "long COVID" symptoms can still exhibit deteriorated attention and memory six to nine months after infection, a study by Britain's Oxford University has found.

Cognitive issues impacting concentration levels, along with forgetfulness and fatigue, are features of long COVID - a condition that afflicts some after an initial bout of infection - but it has not been established how widespread issues with attention span might be following COVID-19 infection.

In the study, participants who had tested positive for COVID-19 previously but did not report other traditional long COVID symptoms were asked to complete exercises to test their memory and cognitive ability.

The researchers found that participants were significantly worse at recalling personal experiences, known as episodic memory, up to six months after infection.

They also had a bigger decline in their ability to sustain attention over time than uninfected individuals up to nine months after infection.

"What is surprising is that although our COVID-19 survivors did not feel any more symptomatic at the time of testing, they showed degraded attention and memory," said Dr Sijia Zhao of the Department of Experimental Psychology, University of Oxford.

"Our findings reveal that people can experience some chronic cognitive consequences for months."

The researchers said that individuals over time demonstrated episodic memory and attention span largely returned to normal after six and nine months, respectively.

Participants also performed well in tests of other cognitive abilities, including working memory and planning, in the analysis of 136 participants.

Stephen Burgess of the MRC Biostatistics Unit at the University of Cambridge highlighted the small number of people involved in the study, adding that it was not randomised.

"However, despite this, differences between the COVID and non-COVID groups in terms of several specific measures of cognitive ability looked at in this study were striking," he said.

"Despite the limitations of non-randomised research, it seems unlikely that these results can be explained by systematic differences between the groups unrelated to COVID infection."