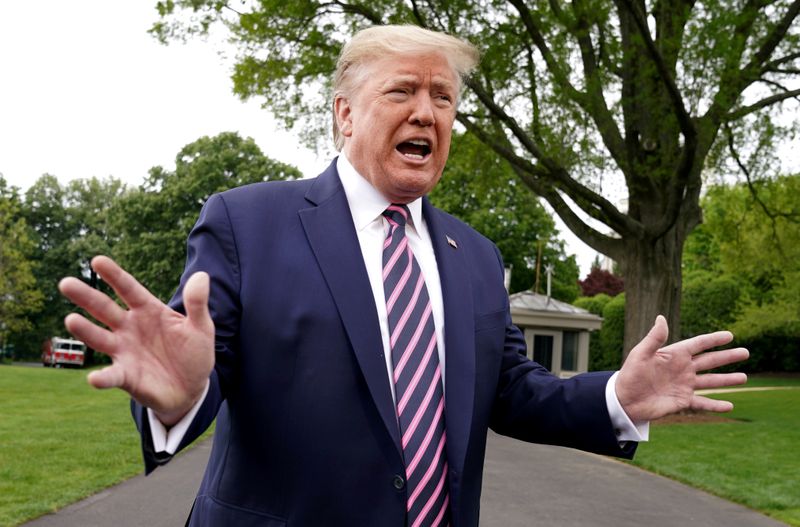 FILE PHOTO: U.S. President Donald Trump speaks to reporters as he departs on travel to Phoenix, Arizona from the South Lawn of the White House in Washington, U.S., May 5, 2020. REUTERS/Kevin Lamarque/File Photo

By Ben Klayman and Sharon Bernstein

DETROIT/SACRAMENTO, Calif. (Reuters) - Michigan and California, two U.S. manufacturing powerhouses, acted on Thursday to allow factories to reopen from coronavirus lockdowns over the next few days, as millions more Americans joined the ranks of workers left jobless by the pandemic.

Governor Gretchen Whitmer of Michigan gave the go-ahead to manufacturers in her state to restart on May 11, removing a major obstacle to North American automakers seeking to bring thousands of idled employees back to work this month.

The U.S. auto sector accounts for 6% of U.S. economic output, with more than 835,000 Americans employed in vehicle manufacturing.

Whitmer, however, extended her stay-at-home order for two more weeks to avoid a new wave of coronavirus infections in an industrial Midwestern state hard hit by the virus and by business closures.

Whitmer had held off easing the state's lockdown, drawing protests and hampering efforts to restart vehicle assembly anywhere in the United States because key parts suppliers are based in and around Michigan's automaking hub of Detroit.

"We're not out of the woods yet, but this is an important step forward," the governor, a first-term Democrat, said in a statement.

Mexico is another link in the chain. If it does not allow suppliers to restart, automakers will not be able to resume most U.S. production for more than a few days, auto executives said.

The Mexican government aims to inform the public on Monday of its plans to reopen the auto industry, a senior official said, speaking on condition of anonymity.

In California, fellow Democratic Governor Gavin Newsom unveiled rules permitting manufacturers in his state - ranging from makers of computers, electronics and textiles to aerospace and chemical plants - to reopen as early as Friday.

His order also gave the OK for warehouse and logistics facilities to return to work, and for retail businesses to offer curbside service.

Newsom, the first U.S. governor to halt most commercial activity in his state - on March 19 - said sufficient progress had been made in reducing California's infection rate to allow for a safe, gradual economic reopening.

Companies, however, are required to meet criteria such as physical distancing of staff, coronavirus testing for employees and workplace training on hygiene and infection control.

Newsom's move drew an enthusiastic "Yeah!!" on Twitter from Tesla Inc (NASDAQ: TSLA) chief executive Elon Musk, though the only assembly plant for his electric car-making business is in Alameda County, one of several San Francisco Bay-area jurisdictions whose more stringent lockdown runs through May.

Musk's rocket company, SpaceX, may benefit more immediately, as its manufacturing facility is based just outside Los Angeles.

Michigan's announcement came three days after neighboring Ohio, also a key player in the auto industry, allowed manufacturers to reopen on Monday, adding to the clamor for Whitmer to follow suit.

(GRAPHIC - Tracking the novel coronavirus in the U.S., https://graphics.reuters.com/HEALTH-CORONAVIRUS-USA/0100B5K8423/index.html)

Several weeks of widespread business shutdowns meant to curb the contagion have dealt a staggering blow to the U.S. economy, casting Americans out of work in numbers unseen since the Great Depression of the 1930s and stoking pressure on politicians to lift restrictions.

The U.S. Labor Department reported on Thursday 33.5 million workers have filed first-time claims for unemployment benefits the past six weeks. Its closely-watched monthly jobs report was due out on Friday, with April's unemployment rate expected to shatter the post-World War Two record of 10.8% set in November 1982.

"I feel like the government is failing us," said Claudia Alejandra, who lost her job at a department store makeup counter in Orlando, Florida, on March 28 and now spends her days trying to secure unemployment benefits that should have arrived weeks ago.

The bleak jobs figures add to a litany of gloomy reports on consumer spending, business investments, trade, housing and productivity.

The toll on human lives has likewise been staggering. Nearly 76,000 Americans have died from COVID-19, the respiratory illness caused by the novel coronavirus, out of more than 1.26 million known to be infected, according to a Reuters tally.

Michigan, Ohio and California were among dozens of U.S. states moving to ease constraints on social and business life, despite a lack of vastly expanded diagnostic testing and other safeguards called for under White House guidelines issued in April.

The 17-page document prepared by the Centers for Disease Control and Prevention (CDC) was rejected because it gave "overly prescriptive" guidance, a member of the White House coronavirus task force said, confirming a report by the Associated Press.

The CDC did not immediately respond to a Reuters request for comment.

But Dr. Deborah Brix, a task force coordinator, later told CNN: "No one has stopped those guidelines. We're still in editing."

In New York and New Jersey, the country's two hardest-hit states, bars and retail businesses deemed non-essential remain closed, and restaurants are limited to takeout and delivery business. In Georgia and Texas, most retail and dine-in restaurants are open, albeit with restrictions on how many people can be served and how close tables may be to one another.

Trump, who had staked his November re-election bid to the strength of the U.S. economy before the pandemic, has continued to press for an escalation of commerce, acknowledging - as predicted by researchers - it may cost lives.

Yet, it remains to be seen how many consumers will venture back into restaurants and shops in the midst of a pandemic.

In one indication of public wariness, the president of the Federal Reserve Bank in Atlanta, Raphael Bostic, told reporters on Thursday preliminary cellphone tracking data showed that "movement has not gone up appreciably" among consumers.

"Whether having an open economic policy is going to translate into economic activity - we are going to learn this in the next couple of weeks," he said.