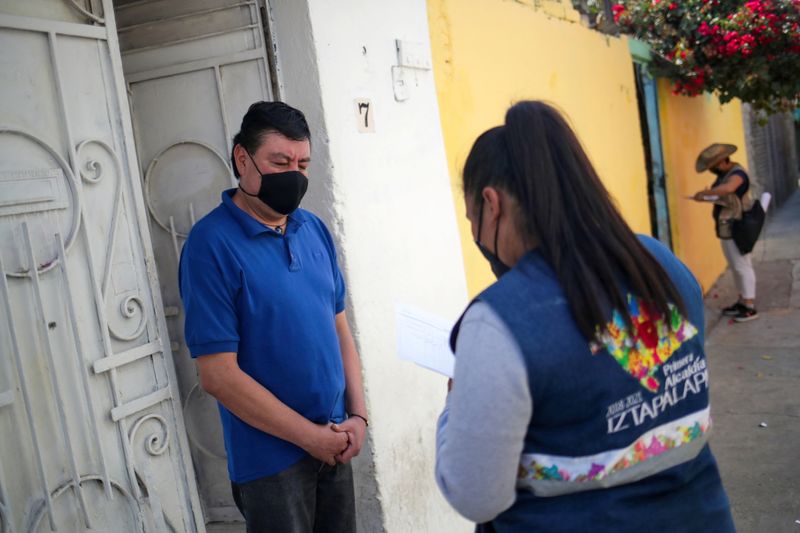 Health brigades visit homes to check if there are people with symptoms of COVID-19, as the coronavirus disease (COVID-19) outbreak continues, in the Iztapalapa neighbourhood, in Mexico City, Mexico February 5, 2021. REUTERS/Henry Romero

MEXICO CITY (Reuters) - While the coronavirus pandemic tears through the sprawling Mexican capital, a team of public health workers going door-to-door in one of its poorest districts offers a glimmer of hope for hard-hit families.

Some 30 traveling public health workers clad in protective gear including gloves and face-shields quiz locals on any symptoms they may have and offer testing as well as oxygen treatments for residents of Iztapalapa, home to some of the city's grittiest, most densely-packed neighborhoods.

Noelia Granados, a 40-year-old nurse and Iztapalapa resident, comes from a family struggling with multiple infections, sadly typical in the district that is home to some 1.8 million.

"Right now, both of my parents are sick, so are two of my siblings as well as my brother's wife and my nieces and nephews," she told Reuters. She explained that the hit forced them to close a family-run shop last month.

Both Granados and her husband tested positive last month, but they are feeling better. That is not the case for her parents, whose health she described as "delicate."

The local public health program, one of the only such outreach efforts in the city, also lends dozens of oxygen concentrators plus still more refillable metal tanks to those receiving treatment at home.

The outreach comes at a time when the rate of vaccinations in Mexico has slowed to a trickle as the country copes with delays from vaccine makers, and the government's official death tally adds more than 1,000 fatalities daily, likely a significant undercount.

Enrique Ruiz, the doctor in charge of the program, stresses that the goal is to quickly identify sick residents via mobile testing sites that can begin to bring the outbreak under control.

"If we detect any symptoms, we invite them to come get tested right away."