Merkel promises lockdown will not last a day longer than necessary 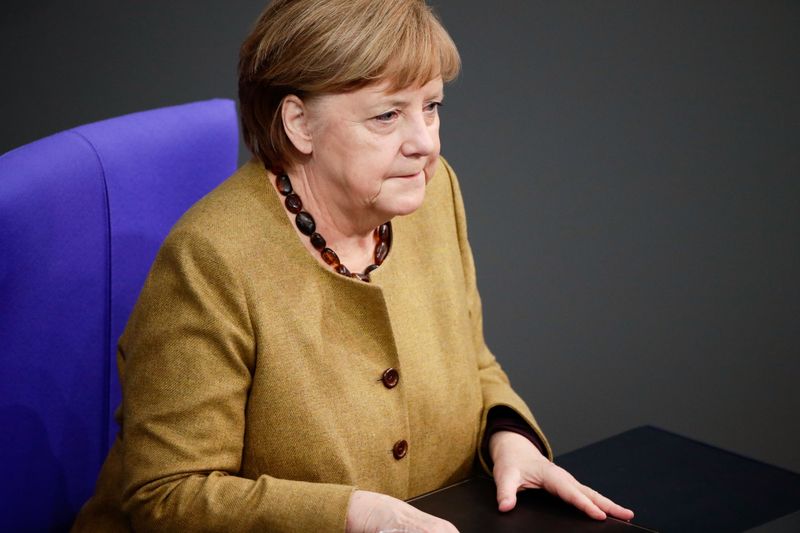 German Chancellor Angela Merkel sits following her speech on the government's response to the coronavirus disease (COVID-19) pandemic, at the country's parliament, the Bundestag, in Berlin, Germany, February 11, 2021. REUTERS/Hannibal Hanschke

BERLIN (Reuters) - Chancellor Angela Merkel urged Germans on Thursday to have a little more patience after agreeing with regional leaders to extend a coronavirus lockdown until March 7 and said restrictions would not last a day longer than necessary.

Addressing the Bundestag, the lower house of parliament, Merkel said the extension was needed to avoid a third wave due to the risk posed by new virus variants.

"I know what we have achieved in our fight against the virus has had, and is still having, a high price," said Merkel.

A gradual fall in daily infections has raised pressure for an easing of tight restrictions in place since mid-December and Merkel agreed with state premiers on Wednesday that some schools and hairdressers could open sooner than March 7.

With neighbouring countries seeking to contain major outbreaks, Germany will impose stricter controls on people seeking to enter its territory from the Czech Republic and Austria's Tyrol region from Feb. 14, an Interior Ministry spokesman said on Thursday.

The Czech Republic earlier announced a stricter lockdown in three districts, including two on the border with Germany, where coronavirus infections have soared above 1,000 per 100,000 residents over the past week.

"The introduction of border controls is required to prevent the virus (mutation) from being transmitted to Germany," the Interior Ministry spokesman said, adding that details of how strict the measures will be were still being finalised.

Seeking to reassure Germans that the lockdown was helping, Merkel said she was aware this was the most serious curtailment of freedoms in post-war Germany. She knew many people were lonely and worried about money and their future.

"As a democracy we have a duty not to keep the restrictions in place for a day longer than is necessary," she said.

Europe's biggest economy shrank by 5% last year and some businesses are dismayed at the latest extension and the lack of a timetable for easing restrictions.

A vaccination programme offered hope for the coming months, said Merkel, adding that she understood people's disappointment with the roll-out, which is far slower than in Britain, Israel and the United States.

To avoid a third wave of infections, however, a little more patience was required.

"I don't think that the back and forth - opening up then closing down again - brings more predictability for people than waiting a few days longer," said Merkel.