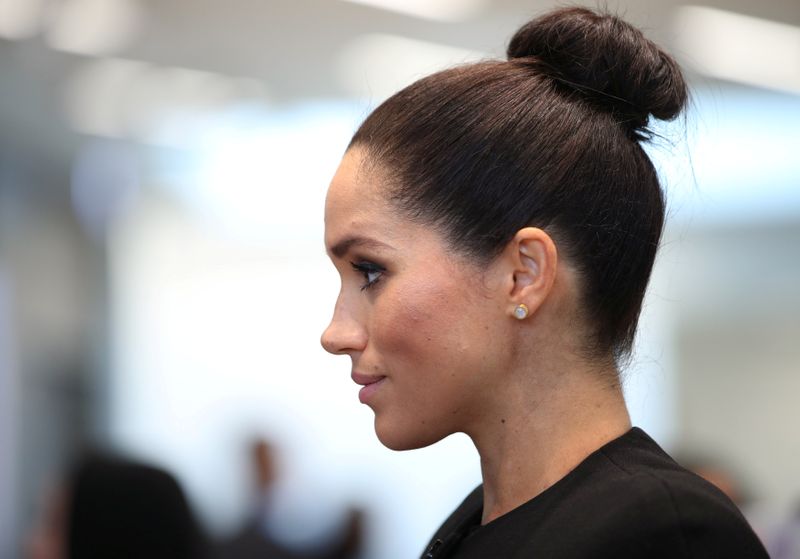 FILE PHOTO: Meghan, Duchess of Sussex during a visit to the Association of Commonwealth Universities at the University of Londo, in London, Britain January 31, 2019. Yui Mok/Pool via REUTERS

WINDSOR, England (Reuters) - Meghan, the wife of Britain's Prince Harry, will watch the funeral of Prince Philip at her home in California on Saturday after she was advised by her doctor not to travel while pregnant, a source familiar with the situation said.

Meghan will watch as Harry walks in procession behind the coffin of the 99-year-old husband of Queen Elizabeth and alongside other members of the royal family, including his father Prince Charles and brother Prince William.

The funeral, to be held at the St George's Chapel in Windsor Castle where Harry and Meghan married in 2018, will mark the first time the prince has met his family since the couple gave an explosive interview to Oprah Winfrey in March.

In it they accused one unnamed royal of making a racist remark and said Meghan's pleas for help when she felt suicidal had been ignored.

The source, who spoke on the condition of anonymity, said Meghan, known officially as the Duchess of Sussex, had hoped to attend the funeral but she was not cleared for travel by her physician.

Much media attention will focus on the royals' behaviour towards Harry. The two princes will walk in the procession behind Philip's four children and separated by their cousin Peter Phillips.

The couple also provided a wreath that included flowers such as the national flower of Greece to represent Philip's heritage, and Sea Holly to reflect his ties to the navy. The card was handwritten by Meghan.