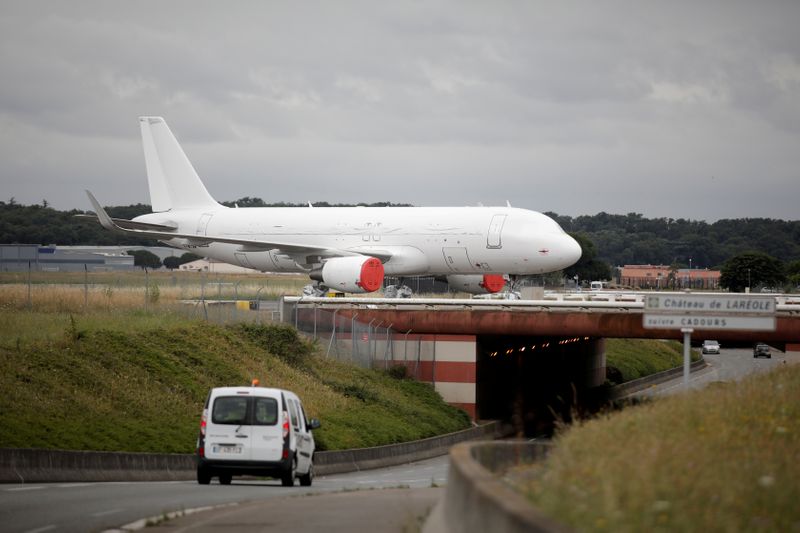 FILE PHOTO: An unmarked A320-214SL Airbus plane is seen on the tarmac at the Airbus factory in Blagnac near Toulouse, France, July 2, 2020. REUTERS/Benoit Tessier/File Photo

PARIS (Reuters) - A rebound in air travel in China and the United States helped to drive a surge in March deliveries for Airbus, sending the planemaker's shares higher. Airbus reported slightly higher deliveries for the first quarter and posted 39 gross orders, including a new deal for 20 A220s to an unidentified buyer.

But the company's net orders - which are adjusted for cancellations - remained in negative territory for the first quarter, with a total of minus 61 net orders dominated by a Norwegian cancellation unveiled in the previous month.

The brisk pace of deliveries confirms a Reuters report on Wednesday that the world's largest planemaker was poised to match or even eclipse the 122 deliveries seen in the first quarter of last year after a surge in March.

Both Airbus and Boeing have had to cut production and lay off thousands of people as the pandemic hit air travel, with Boeing also emerging from a safety crisis over its 737 MAX.

Several analysts said the surprise leap in March deliveries put Airbus on course to hit its full-year target of repeating the 566 aircraft supplied in 2020, a year marked by COVID-19.

Internally, the planemaker is aiming for more than 600 deliveries, suppliers say.

However, with more than 100 jets already sitting outside its factories as airlines try to save cash, Airbus once again produced more than it delivered in the first quarter.

Data issued late on Thursday highlighted a trend of buyers upgrading orders for the 150-seat A320neo to the larger A321neo, which can seat more than 200 passengers - a segment in which Airbus has been strongly outselling U.S. rival Boeing.

Leasing company Avolon ordered 8 single-aisle aircraft but cancelled 8 others and converted some orders to different variants, coming out unchanged in volume terms.

A handful of Chinese airlines or lessors, which had previously not been identified, emerged as the buyers of single-aisle aircraft, meaning no new addition to the order tally.

Analysts said attention would turn to production plans for the rest of the year as the outlook for aviation is split between a domestic recovery seen in the United States and China and concerns over a third pandemic wave in Europe and depressed long-range travel.

Agency Partners analyst Sash Tusa said in a note that Airbus planned output increases in the second half remained vulnerable to slipping by three months or more.

Airbus plans to increase single-aisle output from 40 a month to 43 in the third quarter and 45 in the fourth.

Finance chief Dominik Asam told Germany's Boersen-Zeitung last week that Airbus was in a "good position" with its current forecasts and had anticipated a third wave of the virus.