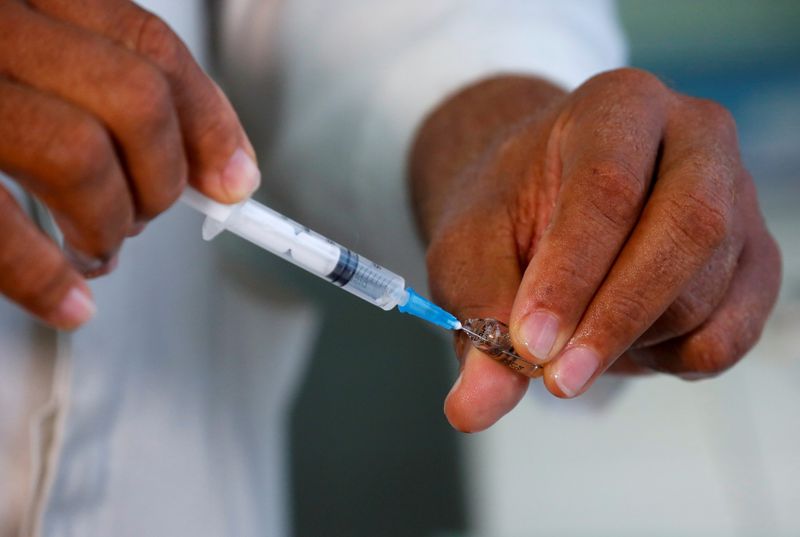 DAKAR (Reuters) - Healthcare disruptions linked to the coronavirus pandemic helped malaria kill 69,000 more people in 2020 than the previous year, but a worst-case scenario was averted, the World Health Organization said on Monday.

In total over 627,000 people globally - most of them babies in the poorest parts of Africa - were killed by malaria last year compared with 558,000 in 2019, the WHO said in its annual malaria report.

The number eclipses the 224,000 people reported to have died from the coronavirus in Africa since the start of the pandemic.

About two thirds of the additional malaria deaths in 2020 were due to coronavirus restrictions disrupting prevention, diagnosis and treatment of malaria, the WHO said.

But efforts to maintain health services despite the challenges meant Sub-Saharan Africa did not see the doubling of malaria deaths in 2020 that the WHO had warned was a possibility.

Instead, the number of deaths in the region rose 12% compared with 2019, according to WHO data.

"Thanks to urgent and strenuous efforts we can claim that the world has succeeded in averting the worst-case scenario of malaria deaths," said Pedro Alonso, director of the WHO's global malaria programme.

Experts hope the fight against malaria might gain considerable ground following the WHO's recommendation in October that RTS,S - or Mosquirix - a vaccine developed by British drugmaker GlaxoSmithKline should be widely given to children in Africa.

"With increased funding, access to life-saving tools, and robust innovation in new tools to stay ahead of the evolving mosquito and parasite, we can accelerate transformative action and end malaria within a generation," said Abdourahmane Diallo, chief executive of the RBM Partnership to End Malaria advocacy group.

"We are now at a critical juncture, and I urge global leaders for renewed commitment and investment," he said in a statement.