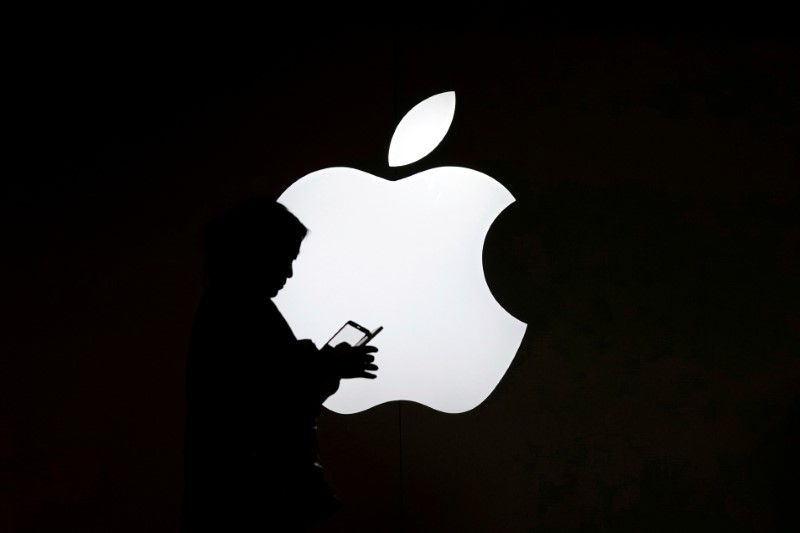 A woman looks at the screen of her mobile phone in front of an Apple logo outside its store in Shanghai, China July 30, 2017. REUTERS/Aly Song

The latest model is tipped to have a price tag upward of $1,000, compared with less than $800 for the top-end iPhone 7 Plus. That is unlikely to make a major dent in U.S. sales, analysts say, but could have a greater impact in China, where the cost is roughly double the average Chinese monthly salary.

The success of Apple's next iPhone in China is crucial for the Cupertino-based firm, which has seen its once-coveted phone slip into fifth position in China behind offerings from local rivals Huawei Technologies Co Ltd [HWT.UL], Oppo, Vivo and Xiaomi Inc [XTC.UL].

Greater China, which for Apple includes Taiwan and Hong Kong, accounted for roughly 18 percent of iPhone sales in the quarter ended in July, making it the company's top market after the United States and Europe. Yet those sales have been declining steadily and are down 10 percent from a year earlier, in contrast with growth in all other regions.

And the iPhone's share of China's smartphone shipments fell to 9 percent in January-June, down from 14 percent in 2015, showed data from consultancy Counterpoint Research.

While the iPhone 6 took China by storm in 2014, models since have received a more muted response.

"I'll wait for a drop in price, it's too expensive," said Angie Chen, 23, a project manager in Nanjing and iPhone 6 owner.

Chen said she might wait for the new phone's successor, when prices will fall. "It's a nice number to hear, but there's no rush."

Eight is the luckiest number in China because it sounds similar to the phrase meaning "to get rich".

"Apple really needs to launch a very innovative product this time around," said Mo Jia, Shanghai-based analyst at Canalys. However, the rising clout of local rivals would nevertheless make life tough for the U.S. firm, he said. "It has its work cut out."

The iPhone 7 suffered from the perception that it was too similar to earlier models. This time, despite talk of wireless charging, advanced touch screen and facial recognition technology, Chinese netizens are yet to replicate the online mania around previous iPhone launches.

Mentions of "iPhone 8" on popular Chinese social media platform Weibo - an indicator of consumer interest - were running slightly ahead of the similar period before the iPhone 7 launch, but were far more muted than with the iPhone 6.

Apple declined to comment on the new phone, price or supply.

In the United States, analysts are less certain that a $1,000 price will have a dramatic effect. Around four out of five of the consumers who in the past bought the top end model would likely be willing to do so again despite the price jump, estimated analyst and veteran Apple watcher Gene Munster of Loup Ventures.

Beyond that, Apple is expected to cover other price points by retaining some sort of low-end model similar to the current iPhone SE, which sells for $399. That is likely to ensure iPhone customers stay within the Apple ecosystem even if prices on top-end models rise.

"They need to still offer something for each market. They still will have that," Munster said.

Another factor for U.S. sales will be discounts from carriers, which might opt to use the buzz around the new iPhone launch to lure customers away from their competitors by offering deals that would soften the blow of higher prices.

"The weapons of competition are increased phone subsidies, discounted phone payment plans and device trade-in offers," BTIG analyst Walter Piecyk wrote in a note to clients. "Promotions are already on the rise for the Samsung phones introduced earlier this year."

In China, one effect of Apple's costliest phone to date will be the rise of sales on credit.

"We will continue to stock the cheaper models or we won't sell much," he said.

Fenqile, a service founded by a former Tencent Holdings Ltd <0700.HK> executive that allows users to pay in instalments, said shoppers buying iPhones on the site had increased alongside rising prices - spiking in the second quarter of the year.

Apple itself has launched an instalments plan in China supported by three state-linked banks.