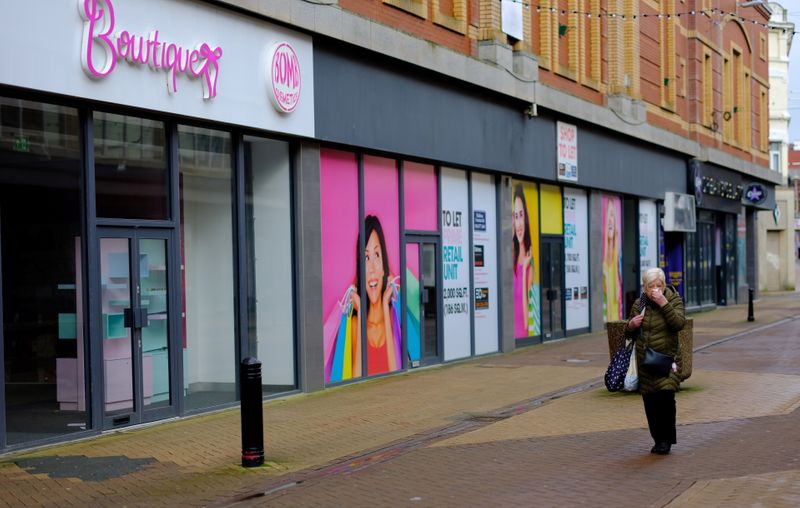 FILE PHOTO: A woman walks past a row of empty retail units on an empty shopping street in Blackpool, Britain, March 9, 2021. REUTERS/Phil Noble

LONDON (Reuters) - Britain's economy has endured a torrid start to 2021, hit by a new COVID-19 lockdown and disruption caused by the country's less open trade relationship with the European Union.

While better days are ahead, Bank of England officials meeting ahead of Thursday's monetary policy announcement must weigh up the likely strength of the recovery, the lasting damage caused by the pandemic, and how much inflation might result.

Here are a selection of indicators that chart the progress of Britain's economy so far this year:

The latest official data showed Britain's economy contracted in January, although not by as much as feared by some economists. Output remained 9% below its level in February 2020.

Tax office estimates of the number of employees on payrolls showed tentative signs of recovery in January. But they remain more than 700,000 below the pre-pandemic norm.

BoE Governor Andrew Bailey said on Monday he thought economic output would recover to its late-2019 level by around the end of 2021, helped by Britain's speedy roll-out of COVID-19 vaccines.

IS THE INFLATION TIGER PROWLING?

BoE Chief Economist Andy Haldane last month described the threat of inflation as a tiger that was beginning to stir. Most of his Monetary Policy Committee colleagues sound less worried.

Gauges of price pressure in Britain paint a mixed picture.

The BoE's rate-setters will find no cause for alarm in the latest surveys of inflation expectations among the British public, which have shown little change of late.

But companies are increasingly reporting increased cost pressures, especially among manufacturers and construction companies that are struggling with supply chain problems, according to the latest IHS Markit/CIPS surveys.

Trade between the United Kingdom and the European Union was hammered in the first month of their new post-Brexit relationship, with record falls in goods shipments in both directions as COVID-19 restrictions continued on both sides.

British goods exports to the EU, excluding non-monetary gold and other precious metals, slumped by 40.7% in January compared to December, the Office for National Statistics said on Friday. Imports fell by 28.8% - another record.

The ONS said the COVID-19 pandemic, which put Britain back under lockdown measures in January, made it hard to quantify the Brexit impact from new customs arrangements, and there were changes in the way data was collected.

But there were also signs of a Brexit hit.

GRAPHIC-UK trade with EU slumps by most on record in January: https://graphics.reuters.com/HEALTH-CORONAVIRUS/BRITAIN-ECONOMY/yzdvxexxopx/chart.png

GILT YIELDS ON THE RISE

British government borrowing costs - measured by the yield on the benchmark 10-year gilt - have increased by more than 50 basis points over the last three months, the biggest increase in over four years.

The rise reflects the better prospects for Britain's economy as the country races ahead with its coronavirus vaccination campaign and a jump in U.S. Treasury bond yields on the back of U.S. President Joe Biden's $1.9 trillion stimulus plan.

Finance minister Rishi Sunak says Britain's stock of government debt is increasingly sensitive to rising interest rates. Some economists think that would only be a problem if borrowing costs went up without an economic recovery that would boost tax revenues for the government.

Despite the recent rise, borrowing costs are at historically low levels, with the 10-year gilt yielding 0.833% on Wednesday - similar to rates seen in late 2019 and way down from more than 5% shortly before the 2008-09 global financial crisis.