Latin American payment giant rises amid pandemic, with an eye on China's Ant 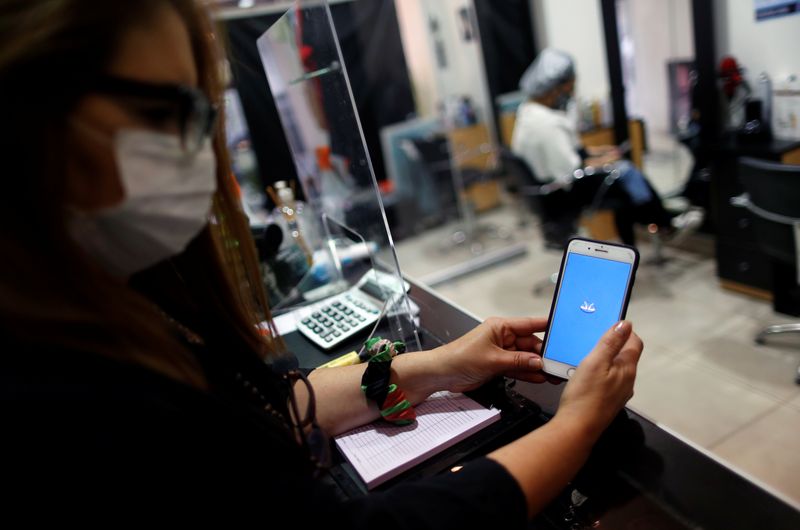 BUENOS AIRES (Reuters) - Latin America's top e-commerce firm is revving up its digital payments engine as shops shift online amid the coronavirus pandemic, and is looking toward China for inspiration to bring the region's un-banked and cash-loving savers online.

Transactions on the platform of Mercado Pago, the finance arm of MercadoLibre (NASDAQ: MELI), more than doubled in the second quarter, and its CEO sees China's Alibaba <9988.HK> and its huge payment affiliate, Ant Group, as a model to follow.

"Many of the things we did were inspired by how they have worked in China," Osvaldo Gimenez, Mercado Pago's chief executive, told Reuters, adding the unit also had close ties with Tencent Holdings Ltd <0700.HK>, India's Paytm and U.S. firm PayPal Holdings Inc (NASDAQ: PYPL), which invested $750 million in MercadoLibre last year.

"When we saw what Ant Financial had done with their investment fund, we replicated that with our investment funds in Argentina, Brazil and Mexico," he added, referring to a money market fund for savers akin to Ant's Yu'e Bao.

MercadoLibre's payments drive offers a tantalizing prospect of an e-commerce-to-digital-wallet ecosystem that could come to dominate in Latin America in the same way Alibaba and Ant are ubiquitous in the world's No. 2 economy.

The firm's market capitalization has doubled this year alone to $61.6 billion, though that is still a far cry from Ant's targeted valuation of $250 billion. Mercado Pago's fund, luring savers to invest small sums for higher returns than at banks, has over 11 million users, again far smaller than Yu'e Bao.

But there is room for huge growth.

Half the population in Latin America lacks bank accounts, and digital payment firms are blossoming, including players like banking app Uala and unicorns dLocal and Nubank. The region's mobile payments market is forecast to hit $302.7 billion by 2025, according to a report from consultancy PayNXT360, up from $50 billion in 2016.

Purchases on MercadoLibre now account for just 35% of total Mercado Pago transactions as more people use the platform, which offers QR code payments, debit cards, a digital wallet and transfers, for other tasks.

For a graphic on Digital Payments Rise:

A wave of small businesses going digital during the pandemic has helped. Argentine Andrea Manoli was forced to shutter her Buenos Aires hair salon due to a lockdown and turned to selling hair products online, using the app.

"It was just a more practical way of doing things, than giving a bank number," Manoli said, citing the platform for helping fuel her business.

Alejandro Pitashny, owner of Buenos Aires restaurant Fayer, said he had switched to the platform both to take payments for deliveries and to pay suppliers, adding digital payments worked well in the pandemic era.

After the restaurant reopened for outdoor dining, Pitashny continued to offer the app as a payment option for customers. "It's a complementary tool for restaurants and other businesses in Buenos Aires, that's for sure. It's here to stay."

"MercadoLibre's payments business is huge, and it's something that wasn't their core focus at the beginning," he said. "There's a huge opportunity in digital payments in Latin America, and there probably won't be just one winner."

Gimenez said Chile and Colombia would be major focuses for the company next year. He added the payments unit was happy for now to grow "aggressively" together with the core e-commerce business, though he did not rule out a future spin-off or IPO.

"I think once people get familiar with payments for services by tapping their phone and scanning a specific bill, there is no way back to lining up for 20 minutes to pay an electricity bill," he added.

In cash-heavy Latin America, shifting people online still has its challenges. Just over half of the region's adults have a bank account, according to World Bank data from 2017, though digital payments have been an area of growth.

"There's been more and more being spent online versus offline. We don't think this is something new, but we do believe there has been an acceleration in the few months during the pandemic," said SebastiÃ¡n Kanovich, CEO of Uruguay-based dLocal.

The cross-border payments firm recently became a so-called unicorn, valued at over $1 billion, after raising $200 million in new funding.

"Once you build a highway, more people get to be connected with these companies," Kanovich added.

Argentine mobile banking service Uala, backed by Tencent and SoftBank Group Corp <9984.T>, recently announced plans to expand to Mexico, where only about 47% of people have a bank account, after seeing an "explosion" of payments for services during the health crisis.

Uala CEO Pierapolo Barbieri told Reuters the firm had added 250 jobs during the pandemic. "We've seen changes in weeks or months that we were expecting in years," he said in a group interview.

For a graphic on MercadoLibre's pandemic bump: