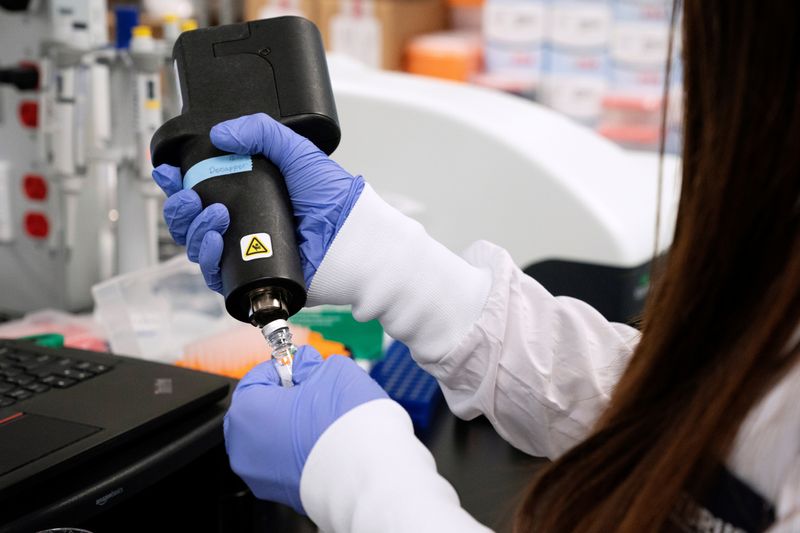 CHICAGO (Reuters) - The first two COVID-19 vaccines to enter large-scale U.S. trials will not be tested in pregnant women this year, raising questions about how this vulnerable population will be protected from the coronavirus, researchers told Reuters.

Moderna (NASDAQ: MRNA) and Pfizer (NYSE: PFE), which has partnered with Germanyâs BioNTech <22UAy.F>, this week separately launched clinical trials that use a new and unproven gene-based technology. Both companies are requiring proof of a negative pregnancy test and a commitment to using birth control from women of childbearing age who enroll.

Bioethicists, vaccine and maternal health experts have argued for years that pregnant women should be included early in trials of pandemic vaccines so they would not need to wait until long after a successful candidate emerges. That debate fell on deaf ears in recent outbreaks of Ebola and Zika, but has taken on new urgency in the era of COVID-19, as studies show pregnant women are at increased risk of severe disease from the new coronavirus.

âIt's a problem because if (vaccines) are not tested in pregnancy, then they may not be available or people may not be comfortable offering them," said Dr. Denise Jamieson, chief of gynecology and obstetrics for Emory Healthcare in Atlanta.

According to the 2012 Census, 75.4 million U.S. women were of childbearing age, defined as 15 to 50 years old. Currently, pregnant women are recommended to take flu and whooping cough vaccines and certain others depending on individual circumstances, but none of these have been specifically tested and proven safe for pregnant women.

âWe have an enormous number of women of childbearing age and potentially getting pregnant, and whatâs the safest vaccine for them?â said Dr. Larry Corey, a vaccine expert at Fred Hutchinson Cancer Center in Seattle who is helping oversee vaccine trials conducted by Moderna and other drugmakers in collaboration with the U.S. government.

Doctors may want to see even more data for completely new vaccine technologies, such as those used by Moderna and Pfizer, compared with one that has already been used in pregnant women.

Such differences highlight why "we need multiple vaccines" to best address the needs of specific populations, Corey said.

A PRECEDENT IN PREGNANCY

Johnson & Johnson (NYSE: JNJ), which kicked off a small-scale safety trial for its COVID-19 vaccine this week, is using the same underlying technology that it used with its Ebola vaccine, which has been used in 1,000 pregnant women in Democratic Republic of Congo. Larger studies with that vaccine are now under way.

J&J's chief scientific officer, Dr. Paul Stoffels, told Reuters the company has done many years of "extensive" preclinical study with the Ebola vaccine, including on pregnant animals, and "has not see any challenges."

Stoffels said J&J would decide in the next few weeks whether it will include pregnant women in its large Phase 3 late-stage trial for a COVID-19 vaccine due to start in September. Pfizer expects to start toxicology studies in pregnant animals shortly, with data ready for review by the U.S. Food and Drug Administration in the first quarter of 2021. Studies in pregnant women could start some time afterward.

Of course, unplanned pregnancies can happen even when women are using reliable contraception. Based on past experiences in such trials, Gruber said he expects about 1% of women who receive the vaccine in Pfizer's Phase 2/3 trial, or about 150 women, will become pregnant. Those women and their babies will be followed closely.

Moderna said in an emailed statement that the company launched its safety study in pregnant animals at the end of June and expects results by the end of this year.

"Once we have generated additional safety data for our vaccine, and importantly demonstrated that it is efficacious, we intend to conduct additional studies in this important population," a Moderna spokesperson said.

Sanofi may establish a pregnancy registry after the vaccine is approved to track outcomes in pregnant women, as has been done in the past.

Merck & Co (NYSE: MRK) said it has not made any decisions yet on when to test its vaccine candidate in pregnant women. Novavax (NASDAQ: NVAX) and AstraZeneca Plc (NYSE: AZN) declined to comment on their plans.

Dr. Flor Munoz, an expert in maternal use of vaccines at Baylor College of Medicine, said companies have been reluctant to test anything in pregnant women since the 1950s and 60s, after the drug thalidomide, which was used to treat nausea in pregnancy, caused widespread birth defects. She agrees that preliminary testing is needed.

The vaccines "need to be reasonably safe and reasonably effective," she said. "We don't necessarily have to finish the Phase 3 trials."