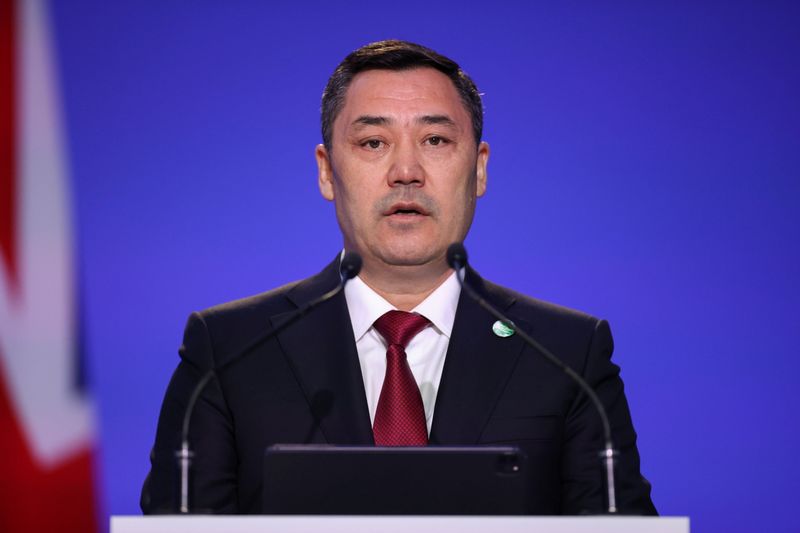 BISHKEK (Reuters) -Allies of Kyrgyz President Sadyr Japarov appeared set to win Sunday's parliamentary election by a landslide, according to early figures, further cementing his grip on the Central Asian nation with close ties to Russia and China.

A Russian military airbase located in Kyrgyzstan allows Moscow to project power throughout the broader region and to locations such as Afghanistan.

With ballots from more than 90% of polling stations counted, opposition party Butun Kyrgyzstan had received 6.8% of the vote, with the rest split between a host of pro-presidential parties.

Japarov, 52, came to power during the turmoil that followed the October 2020 parliamentary elections, the results of which a number of political parties refused to accept.

Freed from prison where he was serving a sentence for a political stunt that involved kidnapping a provincial governor, Japarov became prime minister within days and then successfully ran for president on a nationalist and populist platform.

Aside from pushing through constitutional reforms strengthening the presidency, Japarov's major step so far has been the de facto nationalisation of the giant Kumtor gold mine operated by Canada's Centerra Gold, precipitating an ongoing legal battle.

Japarov has maintained the former Soviet republic's traditionally close ties with Russia and dismissed suggestions of allowing the United States to establish a military base in the country in addition to the existing Russian facility.

This week the state security service headed by Japarov's close ally said it had prevented a coup planned by a group of unnamed former senior officials and parliament members.

About 1,300 candidates from 21 political parties contested 90 parliamentary seats in Sunday's vote under a mixed system in which some seats are assigned to constituencies and others distributed between parties.

Parties needed to pass a 5% threshold to win any seats.

"I have voted for someone based on their track record, for the people whose work I have seen," Bakytbek, a 35-year-old construction engineer, said after voting at a polling station where coronavirus precautions involved voters having temperature checks from people clad in protective suits before being allowed to enter.

"In terms of what they promise, all candidates are the same."