John Paul I, pope who reigned for only 33 days, moves closer to sainthood 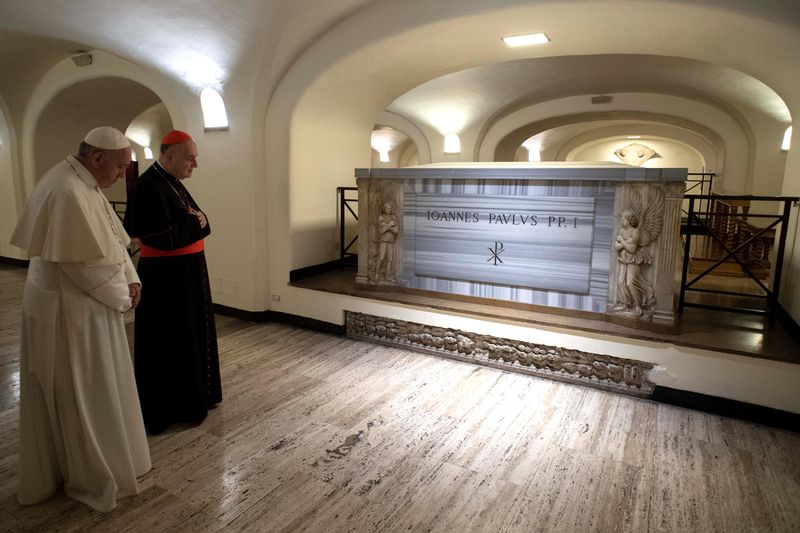 FILE PHOTO: Pope Francis visits the tomb of the late Pope John Paul I under Saint Peter's Basilica at the Vatican, November 2, 2018. Vatican Media/Handout via REUTERS

VATICAN CITY (Reuters) -Pope John Paul I, who reigned for only 33 days in 1978, will be beatified, moving him closer to eventual sainthood in the Roman Catholic Church, the Vatican said on Wednesday.

A statement said Pope Francis had approved a decree recognising a miracle attributed to the intercession of the late Italian pope, whose birth name was Albino Luciani.

John Paul I was elected on Aug. 26, 1978 to succeed Paul VI and died unexpectedly on Sept. 28. He was succeeded by John Paul II, making 1978 go down in Church history as the year of the three popes.

His sudden death gave rise to several books that alleged conspiracy theories involving murder and poisoning but they were generally debunked and he is believed to have died of a heart attack while sleeping. He was 65.

The miracle in the case of John Paul I is believed to be the inexplicable healing of an 11-year-old girl in Buenos Aires, according to Vatican media.

The Roman Catholic Church teaches that only God performs miracles, but that saints who are believed to be with God in heaven intercede on behalf of people who pray to them.

No date for the beatification was announced. Beatification ceremonies usually take place in the person's native area. John Paul I was born into a poor family in 1912 in the small mountain town of Canale d'Agordo in Italy's northern Veneto region.

After the beatification, a second, distinct miracle would have to be attributed to him in order for him to be declared a saint.

John Paul I was the last Italian pope before Italy's 455-year-long stranglehold on the papacy ended with the election of his successor, Cardinal Karol Wojtyla of Poland, who took the name John Paul II.

John Paul II's successors are also non-Italian. Benedict XVI, who stepped down in 2013, is German, and Pope Francis is Argentine.