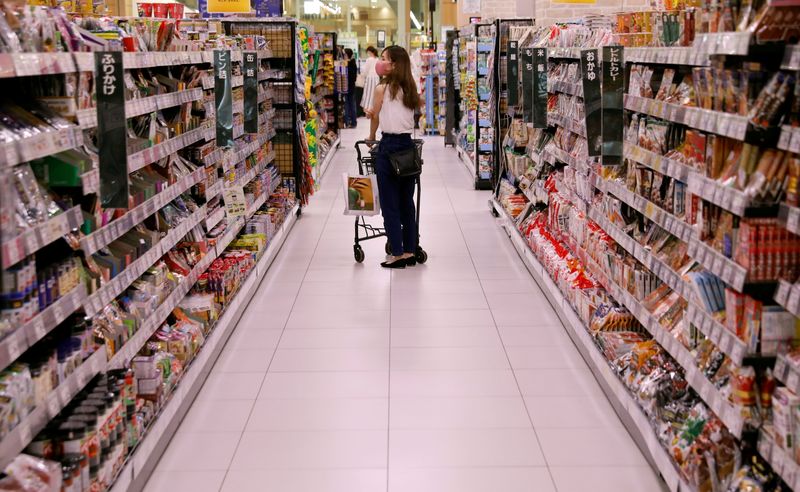 TOKYO (Reuters) - Japan's household spending likely rebounded in June from last month's slump, according to a Reuters poll, as a temporary fall in coronavirus infections during the month underpinned service consumption.

But fresh state of emergency curbs declared in July will drag on consumption by hitting retailers during the Olympic Games and the country's summer holiday season, analysts say. The anti-virus measures are set to be expanded on Friday to a larger part of Japan through Aug. 31 as new COVID-19 cases surge.

"People are encouraged to watch the Olympics at home, so we can't count on the Games boosting consumption," said Yoshiki Shinke, chief economist at Dai-ichi Life Research Institute.

"A spike in infections may also discourage people from going out. We're pretty cautious on the outlook for consumption," he said.

Household spending likely rose 2.0% in June from the previous month on a seasonally-adjusted basis, according to analysts polled by Reuters. That would follow a 2.1% drop in May.

On a year-on-year basis, household spending is expected to have risen 0.1% in June after a 11.6% rise in May, the poll showed. The slowdown reflects a jump in spending in June last year caused by a lifting of the first state of emergency curbs.

Japan's economy shrank an annualised 3.9% in January-March and likely barely grew in the second quarter, as the pandemic took a toll on service spending.

A spike in domestic infections to new records has dashed policymakers' hopes for a strong rebound in July-September economic growth.