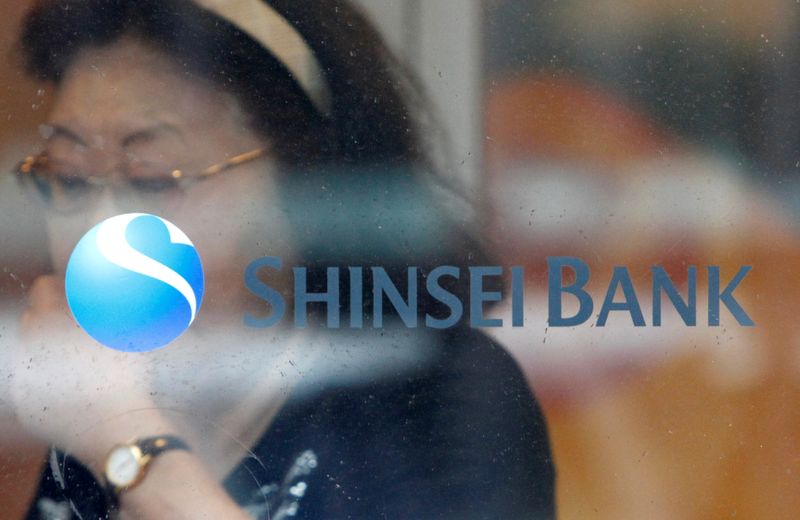 FILE PHOTO: A woman walks past a logo of the Shinsei Bank at its branch in Yokohama, south of Tokyo, June 23, 2010. REUTERS/Issei Kato/File Photo

TOKYO (Reuters) -Japanese financial conglomerate SBI Holdings said on Friday it would extend the deadline for its $1.1 billion unsolicited tender offer for Shinsei Bank to Nov. 24 from Oct. 25 if Shinsei agreed to meet certain conditions.

SBI, which owns Japan's largest online brokerage, operates an online bank and has stakes in multiple regional banks. It is planning to increase its stake in Shinsei to as much as 48% from 20% to take effective control of the lender.

Struggling to find ways to thwart the takeover, Shinsei said https://www.reuters.com/business/shinsei-bank-plans-poison-pill-defence-against-sbis-11-bln-bid-sources-2021-09-17 last week if its board decided that SBI's bid would damage its corporate value, it would seek shareholder approval on an undecided date to issue stock warrants to existing shareholders, a measure that would dilute SBI's stake.

It was also requesting a deadline extension for the tender offer to Dec. 8.

In a letter that was released publicly responding to Shinsei's request for an extension, SBI cited four conditions that needed to be met, including that the Shinsei board explain specific grounds as to why SBI's bid could damage corporate value.

SBI also demanded Shinsei hold a shareholder meeting by Nov. 17 to seek approval for its planned poison-pill defence against SBI's bid. It would extend the deadline if Shinsei failed to win the majority approval required for the defence measure, it said.

SBI is considering what to do if the measure is approved by shareholders, a company spokesperson added.

Separately on Friday, Shinsei said it would temporarily suspend buybacks of its shares worth up to 20 billion yen ($181 million) as SBI's tender offer had changed the pricing process of the shares.

Shinsei may restart buybacks after a termination or withdrawal of the tender offer, it said.