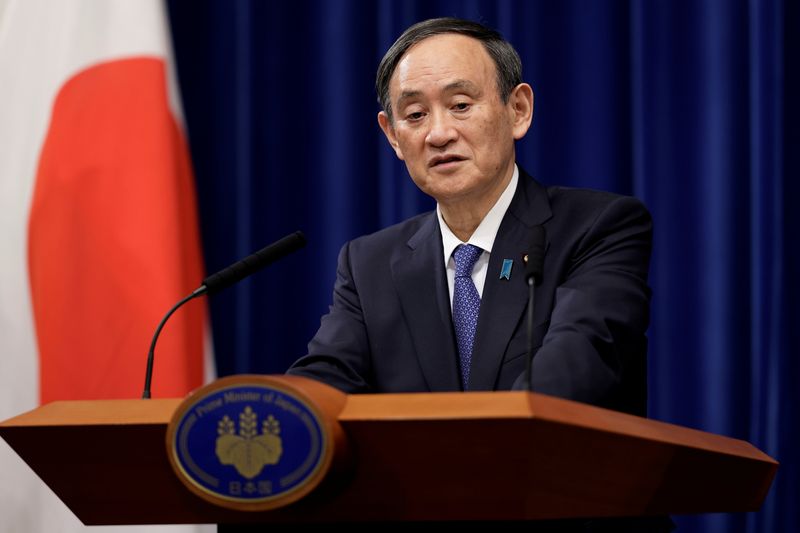 By Daniel Leussink and Mari Saito

TOKYO (Reuters) - Japanese Prime Minister Yoshihide Suga faced renewed pressure on Monday over his handling of the coronavirus pandemic, with a new opinion poll showing many believed the government was too slow to respond to the latest wave of infections.

Opposition lawmakers were also increasingly frustrated with Suga's taciturn leadership style, demanding he provide detailed answers to questions about the COVID-19 crisis and the Tokyo Olympics set to start in less than six months.

Suga is struggling to halt a steady decline in support for his four-month-old government even after launching a raft of measures to contain a third wave of coronavirus infections with the Olympics due to begin on July 23.

Support for Suga's cabinet dropped to 33% from 39% last month, with disapproval rising 10 points to 45%, according to a poll published by the Asahi newspaper on Monday.

The poll conducted by telephone on the weekend showed 80% of respondents thought the government was too slow to declare a state of emergency in response to the coronavirus outbreak which has swept the country since December.

Critics also say Suga took too long to pause a domestic tourism campaign that experts have blamed for contributing to the spread of the virus beyond the initial hotspots in the Tokyo region.

Yoshihito Niki, an infectious disease specialist and professor at Showa University Hospital, agreed the government should have halted the campaign earlier.

"It is clear that was problematic, not just because it may have contributed to rise in case numbers by people travelling around the country, but also by giving young people an impression that they could lower their guard," he said.

The government says its decision to stick with the domestic tourism campaign was appropriate based on infection data at the time.

Infection data released over the weekend indicated that Japan's third, and most deadly, wave of COVID-19 infections was peaking.

Tokyo reported 618 new cases on Monday, with daily cases dropping below 700 for the first time since Dec. 28.

Suga said that despite the fall in cases in Tokyo the government was in no rush to lift the state of emergency.

"Experts indicate that it is necessary to look at the situation a little more to determine that it is a decreasing trend," he told parliament.

A decision on whether to extend the state of emergency could be made in the first half of next week, five sources from the government and ruling party said.

An extension of calls for reduced business hours at restaurants and bars while gradually easing curtailment of other activity is being debated, the sources said.

The Asahi poll came after opposition lawmakers criticised the brevity of Suga's answers to questions on the government's response to the COVID-19 crisis and the Olympics during a parliamentary debate on Thursday.

An Upper House steering committee petitioned Suga's office to provide more thorough responses during future debates, according to the Mainichi and Asahi newspapers.

"To get over it with an abstract, really short answer is the same as rejecting to explain it to the people," Mainichi quoted opposition Constitutional Democratic Party of Japan lawmaker Tetsuro Fukuyama as saying last week.

Suga is standing by the government's commitment to host the Summer Games despite a report in The Times last week saying officials in Tokyo had abandoned hope of holding the event this year.

Opinion polls show the public is strongly against staging the Games amid the pandemic.

Nihon University political science professor Tomoaki Iwai said Suga was "not a great communicator" but his leadership was not currently in doubt.

"There are no strong candidates to replace him. Chances are the current government will drag on despite very weak public support, which would be quite tragic," he said.