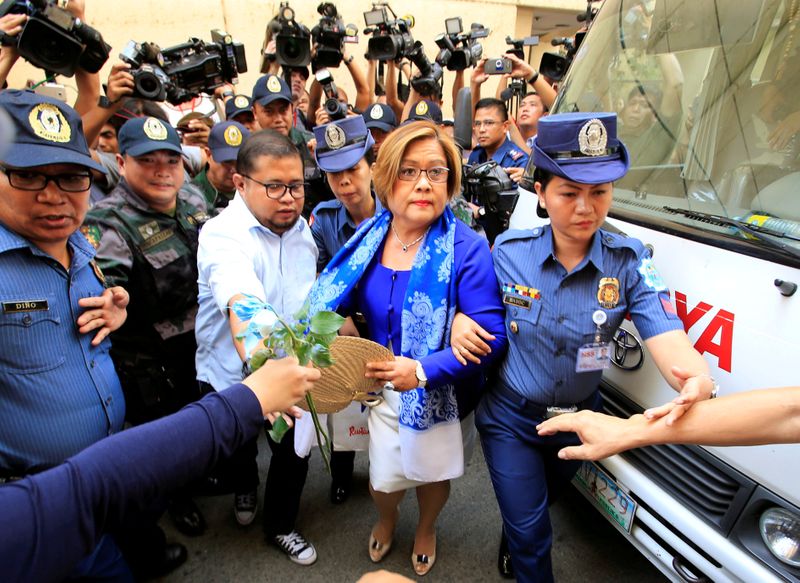 MANILA (Reuters) - A jailed critic of Philippine leader Rodrigo Duterte on Thursday hailed as a "moral victory" a court's dismissal of one of three cases against her, which stem from the president's allegations she prospered from illicit drugs under the previous government.

Senator Leila de Lima, who has spent four years in prison since she led an investigation into alleged summary executions during Duterte's signature war on drugs, said the court's decision showed the charges against her were "trumped-up" by the Duterte administration.

The court said that its granting of De Lima's plea to dismiss the case on lack of evidence was "tantamount to her acquittal".

De Lima, a former justice minister, is considered by many activists as a political prisoner and has received awards from human rights groups for standing up to Duterte over the deaths of thousands of suspected drug peddlers.

"Not a single witness testified that I and my co-accused conspired with drug lords to trade drugs in prisons," De Lima said in a statement.

"From the onset, these cases were filed to silence me and distract me from my duties as senator."

Before and during her detention, De Lima was subject to humiliating public tirades by Duterte, who accused her of adultery and of making a sex tape and even recommended she hang herself.

De Lima sought a court injunction to muzzle Duterte and once called him a "sociopathic serial killer". She has expressed fear for her life because of the "diehard fanatics" among his supporters.

Akbayan Partylist, a leftwing group of lawmakers, said De Lima's first victory should serve as reminder to the government that "despite the weaponisation of the law, the people will push back in order for truth and justice to find their way out."

Duterte's spokesman, Harry Roque said De Lima had no reason to celebrate because she remains in jail.