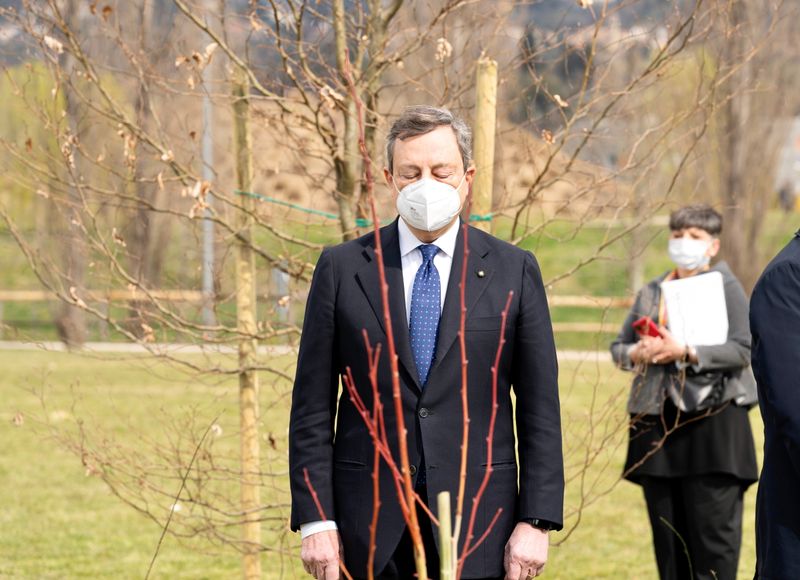 Italian Prime Minister Mario Draghi stands behind a newly planted tree during a ceremony to inaugurate the 'Forest of Memories', honouring victims of the coronavirus disease (COVID-19), as Italy holds its first National Day in memory of victims, at the Tr

BERGAMO, Italy (Reuters) - Flags flew at half mast and thousands of towns held a minute's silence on Thursday as Italy mourned the victims of a coronavirus epidemic that has killed more than 100,000 in 13 months.

Prime Minister Mario Draghi led tributes in Bergamo, an epicentre of the disease's first destructive wave a year ago and where city mayor Giorgio Gori said it had left no one unscathed.

"There is not a single person in Bergamo who did not have to say goodbye to a loved one," he said.

Thursday marked the first anniversary of the day a convoy of army trucks rolled into the city to remove dozens of coffins accumulated in churches and chapels - a stark snapshot of the virus's untamed power.

"The respect we owe to those who have left us must give us the strength to rebuild the world they dreamed of for their children and grandchildren," said Draghi, speaking in a "remembrance wood" being created as a living monument to the dead in a local park.

In all, 103,432 deaths linked to coronavirus have been reported in Italy, the seventh highest toll in the world, including 670 in Bergamo and around 6,000 in the surrounding province.

Gori, wearing a sash in the colours of the national flag, said the real number in his city was much higher as only very few people were tested for the virus in the early days.

Like much of Italy, Bergamo is once again in lockdown to try to contain a third COVID-19 wave that on Wednesday saw a record 324 people nationwide admitted to intensive care, and only a few people were allowed to attend on Thursday in what is set to become an annual commemoration.

Anxious to end the health crisis, Draghi said Italy's ongoing vaccination campaign was a priority and promised that inoculations would carry on unhindered whatever decision the European Medicines Agency (EMA) took about the AstraZeneca shot.

Italy, like several European countries, suspended the use of AstraZeneca vaccines this week over concerns about unusual blood disorders that had appeared in a handful of people. EMA is due to release findings about those cases later in the day.

"Whatever its decision, the vaccination campaign will continue with the same intensity, with the same objectives. Increased supplies of some vaccines will help compensate for delays by other pharmaceutical companies," Draghi said.