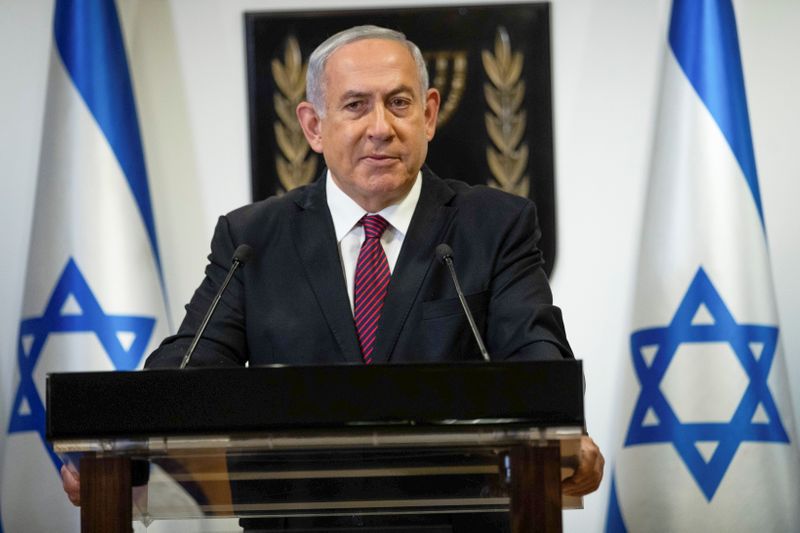 JERUSALEM (Reuters) -Israel's attorney-general secured a deferment on Sunday of a court hearing on planned evictions of Palestinians in Jerusalem, a session that had threatened to stoke more violence in the holy city and heighten international concern.

The government could now have some breathing room to try to defuse a tinderbox situation in Jerusalem, where the court case and friction during the Muslim holy month of Ramadan have led to clashes between Palestinians and Israeli police.

The Israeli Supreme Court had been due on Monday to hear appeals against the planned evictions of several Palestinian families from the Sheikh Jarrah neighbourhood in East Jerusalem, an area captured by Israel in a 1967 war.

A lower court had found in favour of Jewish settlers' claim to the land on which the Palestinians' homes are located, a decision seen by Palestinians as a bid by Israel to drive them from contested Jerusalem.

But in a last-minute legal move, the appellants asked the court to seek a legal opinion from Attorney General Avichai Mandelblit, opening the way for Monday's session to be postponed and the possibility he could argue against the evictions.

A spokesman for Mandelblit said the court agreed to receive a future submission from the attorney general and that a new session would be scheduled within 30 days.

"I'm very optimistic because of the court's decision," said Nabil al-Kurd, 77, one of the Palestinians facing eviction. "We are sitting here in our country, in our land. We will not give up."

After the iftar meal that breaks the Ramadan daily fast, he and a group of elders sat and watched as young Palestinian protesters sang and chanted slogans at settlers across the road, shouting "Freedom, freedom" and "Palestine is Arab".

The Israelis did likewise, singing and dancing, with police in riot gear and on horseback keeping them apart. At the settlers' house across the street, Yaakov, 42, said the court postponement was "a disgrace."

"They should have made a stand and shown that anyone who commits violent acts in Israel is immediately punished and is not rewarded for their bad behaviour," he said, declining to identify himself further.

U.S. National Security Adviser Jake Sullivan expressed "serious concerns" about the situation in Jerusalem, including the potential evictions, in a call with his Israeli counterpart on Sunday, reiterating previous concerns expressed by the State Department.

East Jerusalem tensions have spilled over into clashes between Israeli police and Palestinians around Al-Aqsa, Islam's third-holiest mosque, at the height of Ramadan month, drawing international censure

Confrontations broke out between Palestinians and Israeli police in parts of East Jerusalem on Sunday, including in Sheikh Jarrah and outside the walled Old City, as well as in Haifa, a mixed Arab-Jewish city in northern Israel.

Protesters threw stones and lit fires as police officers on horseback and in riot gear used stun grenades to repel them.

Palestinian militants in the Gaza Strip fired at least four rockets into Israel, the Israeli military said, with one of them being intercepted and others falling short or in open areas. There were no immediate reports of casualties.

Whether further violence will erupt could also depend on another event scheduled for Monday - an annual march by Israeli youth to Jerusalem's Old City, whose population is largely Palestinian, to mark what Israel celebrates as Jerusalem's reunification in 1967.

Palestinians want East Jerusalem as the capital of a future state in the occupied West Bank and Gaza. Israel views all of the city as its capital, including the eastern part that it annexed in a move that has not won international recognition.

The Israeli government has played down any state involvement in the Sheikh Jarrah controversy, which the Foreign Ministry cast on Friday as a "real estate dispute between private parties".

That apparently did little to allay concern in Europe and among regional powers like Jordan and United Arab Emirates, which condemned Israel's conduct around East Jerusalem.

The United Nations Security Council was expected to privately discuss the tensions on Monday.

At a meeting of his cabinet on Sunday, Prime Minister Benjamin Netanyahu made no direct mention of the Sheikh Jarrah case.

But he said Israel firmly rejected pressure not to build in Jerusalem, a reference to opposition to construction on