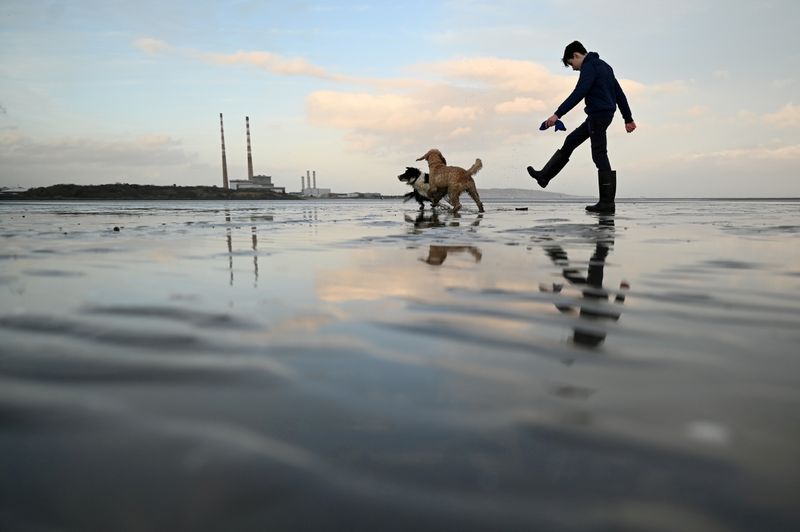 FILE PHOTO: A boy plays with his dogs on Sandymount strand, amid the outbreak of the coronavirus disease (COVID-19), in Dublin, Ireland February 14, 2021. REUTERS/Clodagh Kilcoyne/File Photo

Ireland has administered almost 360,000 vaccines among its population of 4.9 million, so far to healthcare workers, care home residents and most recently people aged over 85. Just over 133,000 of those have received the second of their two doses.

The officials pointed to a sharp fall in the number of healthcare workers contracting COVID-19 to below 300 last week from almost 1,400 in the final week in January.

Ireland is mainly relying on the Pfizer-BioNTech COVID-19 vaccine and has administered much smaller amounts of the Moderna and AstraZeneca shots.

There were also fewer than 200 cases in care homes last week versus 1,250 three weeks ago while the relative number of deaths in hospitals and homes are falling more rapidly than elsewhere after Ireland suffered its deadliest wave to date last month.

"Very hearteningly, we think we are beginning to see strong early evidence of a protective impact of vaccination on those cohorts that are in the course of being vaccinated at present," Ireland's COVID-19 modelling chief Philip Nolan told a news conference.

The government has said if vaccines arrive on schedule, 55% to 60% of people will be fully vaccinated by the end of June.

Nolan added that even though the rate of decline in cases has slowed in the last two weeks, Ireland continued to make "significant progress" against all indicators of disease during a lockdown that was extended into April this week.

The reproduction number - the number of people infected by someone with COVID-19 - remained steady at 0.6 and 0.9, despite the near dominance of the more infectious B1.1.7 variant first detected in Britain.

"Continue doing what you're doing. We've gone from a situation where six, seven weeks ago we were the worst in the world and through the actions of people, we are now in the top 10 in Europe," Deputy Chief Medical Officer Ronan Glynn said.