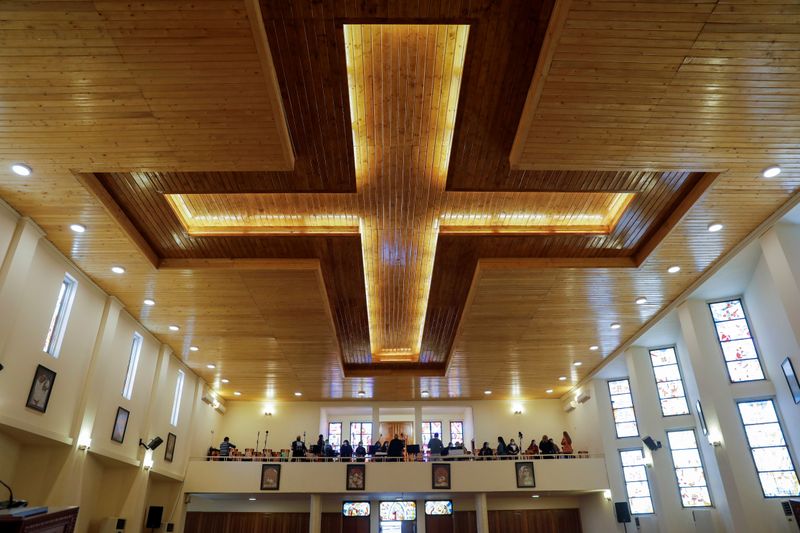 Choir members practice at St. Joseph Chaldean Cathedral, where Pope Francis will hold a mass, ahead of his planned visit to Iraq, in Baghdad, Iraq February 23, 2021. REUTERS/Khalid al-Mousily

(This February 23 story corrects spelling of name in paragraph 14)

ERBIL, Iraq (Reuters) - Iraqi Christians are busy scrubbing churches, practising hymns and preparing for mass ahead of the first ever papal visit to the country, a four-day trip next month that is going ahead despite the coronavirus pandemic and security risks.

The minority community of several hundred thousand was decimated first by al Qaeda's rise in the early 2000s and later by Islamic State, the extremist group that brutally persecuted them and other minority faiths and sects from 2014-2017.

For many of those who remained, or have returned to Iraq where free worship is again possible, Pope Francis' visit from March 5-8 is welcome recognition of how they have suffered for their beliefs.

"We hope that after the pope's visit, the situation of Christians will improve," said Amer Abdelahad, a Christian in Erbil, as he registered to attend a mass for 10,000 people in the northern city on Sunday, March 7.

"Christians in Iraq suffered a lot over the past years, they are emigrating. The pope will come and see this reality on the ground," he added, accompanied by his wife and daughter who will also be at the gathering.

The trip by the 84-year-old leader of the world's Catholics was announced in December, and will take in the capital Baghdad, as well as Ur, a city linked to the Old Testament figure of Abraham, and Erbil, Mosul and Qaraqosh in the plain of Nineveh.

A twin suicide attack in Baghdad killed at least 32 people in January, a reminder of Iraq's ongoing security risks despite the defeat of Islamic State and a general reduction in militant violence. The pope condemned the bombing.

Although some of Iraq's Christians, who include Catholics and Orthodox, have moved back to homes they fled during the upheaval of the last two decades, others foresee further problems and are looking to leave.

Father Dankha Joola, one of the main organisers of the visit to Erbil, said that more than 8,000 people had registered for the mass already.

His biggest challenge is to implement social distancing at the outdoor stadium where the pope will lead the service. The venue has a capacity of around 30,000, but numbers are limited to one third of that due to COVID-19 restrictions.

Daniella Rafiq is one of more than 200 volunteers lending him a hand. For her, the visit is a once-in-a-lifetime opportunity to see the pope.

"Over the last few years, whenever there was a meeting with the pope in different countries, especially with young people, we were deprived," she said, referring to difficulties she and other Iraqis faced in obtaining visas to travel in the past.

Father Naswhan Cosa, who is organising the religious service, said it would be unique, with prayers in Italian and an orchestra and choir of about 80 local volunteers performing hymns in Arabic and Syriac, the neo-Aramaic language spoken by Christians in northern Iraq.

Before the mass in Erbil, Pope Francis will visit the city of Mosul and the nearby town of Qaraqosh, both under Islamic State occupation for three years.

Mosul's once thriving Christian community is today reduced to no more than 70 families, while in Qaraqosh a relatively large number have returned, partly thanks to the church's role in leading reconstruction efforts and mobilising Christians.

Dozens of volunteers were proud at the prospect of receiving the pope in the Grand Immaculate Church, Iraq's biggest, which doubled as a shooting range for Islamic State fighters before being ravaged by fire.

Some wiped the stone floor, stopping only to dance to Christian songs that resonated through the cavernous grey-stone edifice, still virtually empty since it was restored.

"The pope's visit is not only for Iraq's Christians, but for the whole country," said Father Francis, who was helping put up posters of the pope around the streets of Qaraqosh.