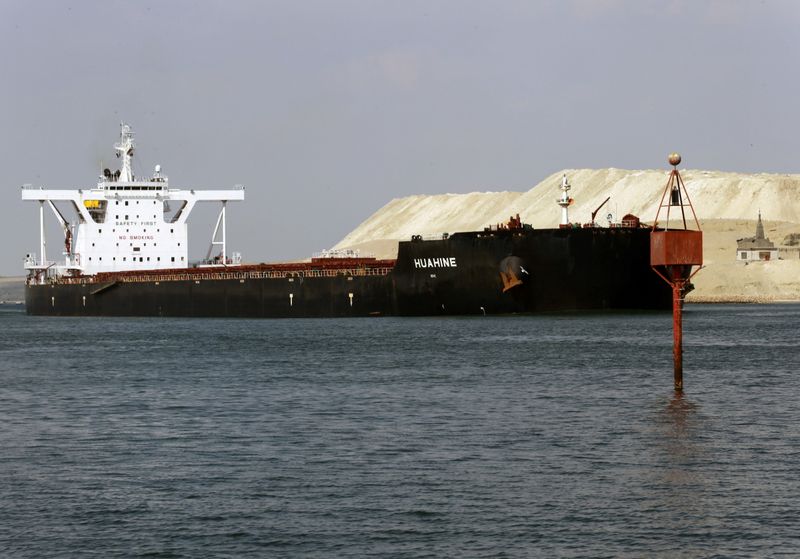 FILE PHOTO: A ship is seen after sailing through Suez Canal as traffic resumes after a container ship that blocked the waterway was refloated, in Ismailia, Egypt, March 30, 2021. REUTERS/Hanaa Habib

ISMAILIA, Egypt (Reuters) -Divers inspected the hull of the Ever Given on Wednesday as the man tasked with investigating how the giant container ship ran aground, choking off international trade through the Suez Canal for almost a week, boarded the vessel.

Lead investigator Captain Sayed Sheasha, who boarded the Ever Given on Wednesday afternoon, told Reuters that the investigation would include examining the seaworthiness of the ship and its captain's actions to help determine the causes.

Divers had gone to check the hull of the ship while it is anchored in the Bitter Lakes area, a canal source said.

The Ever Given's captain was committed to fully complying with the probe, Sheasha said.

"The ship will remain in the lakes area until the investigations are complete," Suez Canal Authority (SCA) Chairman Osama Rabie told a local television channel late on Wednesday, adding that there was no definite time frame for the inquiry.

Rabie also said that investigators on Wednesday questioned the crew.

"The amount of damage and losses, and how much the dredgers consumed, will be calculated. Estimates, God willing, will reach a billion dollars and a little bit more, this is the country's right," Rabie told another local channel, without specifying who would pay and whether Egypt has already sought compensation.

The six-day blockage threw global supply chains into disarray after the 400-metre-long (1,300-foot-long) ship became jammed diagonally across a southern section of the canal, the shortest shipping route between Europe and Asia.

The SCA said on Wednesday that shipping had returned to normal levels, with a total of 81 ships transiting the canal.

Egypt's Leth Agencies said on Wednesday that a total of 163 ships had transited the Suez Canal since its reopening and that 292 ships were currently waiting.

Five liquefied natural gas (LNG) vessels transited on Tuesday, commodities analysts Kpler said in a note, adding that it appeared congestion at the canal was "now quickly tapering off".

The SCA has scheduled accelerated shipping convoys and has said it hopes the backlog of ships can be cleared by the end of the week.

The blocking of the canal is expected to give rise to flurry of insurance claims, with Lloyd's of London expecting a "large loss", possibly amounting to $100 million or more, according to its chairman.

The Japanese owner of the Ever Given said it had not received any claims or lawsuits over the blockage.