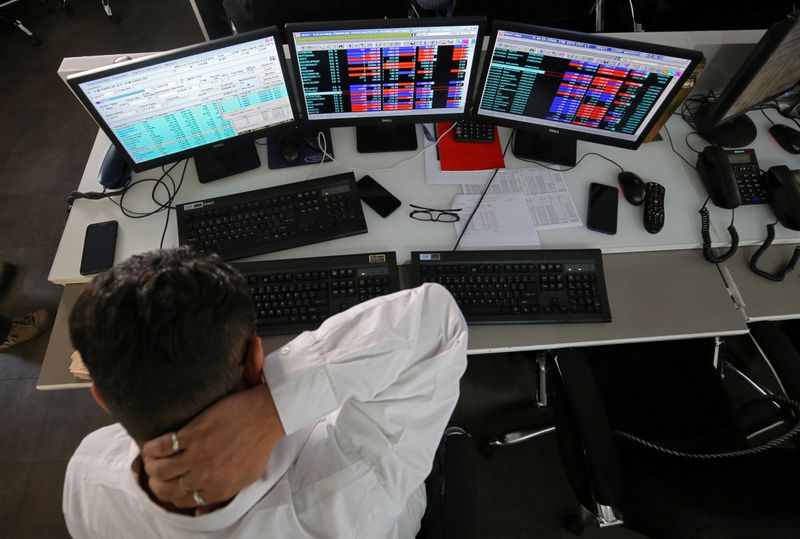 FILE PHOTO: A broker reacts while trading at his computer terminal at a stock brokerage firm in Mumbai, India, December 11, 2018. REUTERS/Francis Mascarenhas

By Abhirup Roy and Aditya Kalra

MUMBAI (Reuters) - India's largest brokerage Zerodha is facing a backlash from traders who saw their equity positions abruptly closed during an exchange glitch, amidst criticism that a lack of communication from the country's top bourse caused losses.

The National Stock Exchange (NSE) suddenly shut down for nearly four hours on Wednesday, blindsiding traders. As the NSE did not swiftly update whether, and when, it would reopen, brokers began closing intra-day equity positions on another exchange later, leading to sharp losses for some investors.

Hundreds of traders who bought stocks via Zerodha, dubbed the Robinhood platform of India, voiced concern on Twitter, with many posting pictures showing portfolio losses due to trades squared off by the broker.

Many signed an online petition calling for strict action.

Other traditional brokerages that rely more on relationship managers and take trade orders from clients via telephone also resorted to similar risk mitigation strategies on Wednesday, traders said, but criticism of Zerodha was most vocal.

Zerodha revolutionized stock trading with its discounted offerings and easy-to-use smartphone apps in India. Today, it says it is the country's largest brokerage with more than 4 million clients, accounting for 15% of daily retail trading volume.

While the episode has put Zerodha and some other brokerages at the centre of a firestorm, market experts say NSE was more to blame and brokers have their hands tied in such situations.

"Brokers had no option but to square off their clients' positions..., otherwise they would have had to face a margin requirement," said Shriram Subramaniam, a corporate governance expert and founder of proxy advisory InGovern.

In a letter to the market regulator on Thursday, the Association of National Exchanges Members of India, which represents major brokers, said âhuge monetary lossâ to investors could have been prevented if NSE had communicated swiftly.

The NSE on Wednesday announced that it had shut at 11:40 a.m. local time after a telecom glitch. Zerodha said NSE did not share updates on any possible reopening and so it "squared off all" equity intra-day positions at 3:10 p.m on another Indian exchange.

Just around 7 minutes later, NSE announced it would reopen, but it was too late for many. Zerodha said in a blog post it would not have taken the risk mitigation measures if NSE had informed brokers of a potential reopening in advance.

Zerodha's website states intraday square-off timings can change at the discretion of its risk management team.

Still, Satish Madhav Giri, 30, pinned the blame on Zerodha, saying its measures inflicted a loss of about 10,000 rupees ($138) on his trade.

In a statement early on Thursday, the NSE said the telecom issue affected its online risk management system and it was analyzing the incident.

(Reporting by Abhirup Roy in Mumbai and Aditya Kalra in New Delhi; Editing by Mark Heinrich)