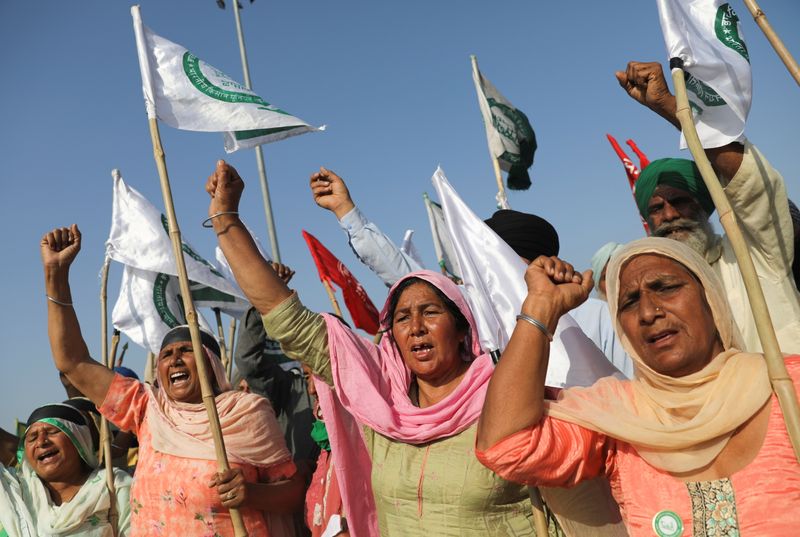 FILE PHOTO: Women shout slogans at an expressway which was blocked by farmers to mark the 100th day of the protest against the farm laws, near Kundli border, in Haryana, India, March 6, 2021. REUTERS/Anushree Fadnavis

NEW DELHI (Reuters) - India's foreign ministry said on Tuesday it had summoned the United Kingdom's high commissioner over what it called "unwarranted and tendentious discussion" of Indian agricultural reforms in the British parliament.

Three new agricultural laws introduced by India late last year have led to months of protests by farmers, angry at what they see as sops to large private buyers.

A discussion among UK lawmakers on Monday has caused anger in New Delhi, which accuses the parliamentarians of interfering in India's internal affairs.

At Tuesday's meeting India's foreign secretary Harsh Vardhan Shringla told Alexander Ellis, who was appointed as envoy earlier this year, the debate "represented a gross interference in the politics of another democratic country," according to a ministry statement.

"He advised that British MPs should refrain from practising vote bank politics by misrepresenting events, especially in relation to another fellow democracy," it added, in an apparent reference to British lawmakers and voters of Indian descent.

A spokesman for the British High Commission, as the country's embassy in India is known, declined to comment.

Unrest has been particularly intense in the state of Punjab, that has large diasporas in the United Kingdom, United States and Canada.

The protests received global prominence after celebrities including pop star Rihanna and climate activist Greta Thunberg voiced their support for the movement earlier this year.