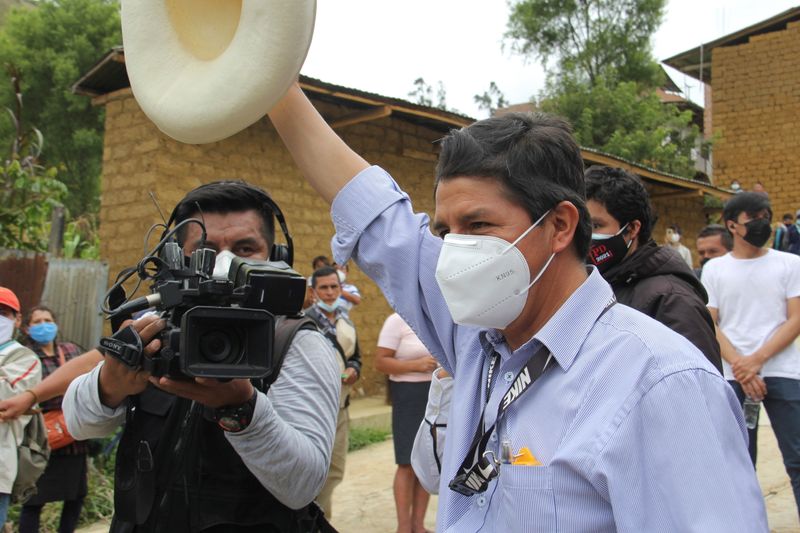 FILE PHOTO: Pedro Castillo of Peru Libre party waves to the media after casting his vote, outside a polling station in Cajamarca, Peru April 11, 2021. Vidal Tarqui/ANDINA/Handout via REUTERS

LIMA (Reuters) - Peru is set for a divisive presidential run-off between the Andean country's ascendant socialists, buoyed by voter discontent over the economy and pandemic, and the conservative heir of the powerful and polarizing Fujimori dynasty.

The first-round vote on Sunday took a surprise turn when socialist Pedro Castillo, a 51-year-old union leader and primary school teacher who was largely unknown before polling day, jumped into the lead.

The official count on Monday showed Castillo with 18% of the vote, with over 80% of ballots counted, followed by conservative Keiko Fujimori, the daughter of imprisoned ex-leader Alberto Fujimori who herself faces corruption allegations, with 13.2%.

That result, with both candidates well short of the simple majority needed to win outright, would mean the pair go head-to-head in a June 6 second-round vote.

Both candidates are divisive for different reasons. Castillo plans to rewrite the constitution and take the world's No. 2 copper producer sharply to the left. Fujimori faces a probe over alleged money laundering for which prosecutors are seeking a 31-year prison sentence. She denies the charges.

"If we vote for Keiko we will return to the same old things," said Luis Rojas, a voter in Lima, referring to citizen anger about corruption among the political elite. He was not convinced by Castillo either, who he said was a "communist."

"If we vote for Pedro Castillo it will change all of Peru."

Goldman Sachs' Alberto Ramos wrote after the vote that no pollsters had modeled a run-off between the pair because it had appeared so unlikely, adding both had many critics.

"Keiko Fujimori had the highest rejection rate among all major candidates but on the other hand Ms. Fujimori will be facing a candidate espousing radical leftist polices," he said.

Castillo, whose Free Peru party terms itself "socialist left," has emerged from relative obscurity. In pre-election polls just a month ago he had been trending at under 4% of the vote - outside the leading six contenders most had focused on.

In the past four weeks his rise had been rapid, with exit polls showing support for his policies, which include rewriting Peru's constitution, strong in poor areas of the country hit hard by the coronavirus pandemic.

The surprise could give investors a jolt in the country, which while long politically turbulent has been one of the more steadfast and reliable markets in the region, attracting inflows into its bonds and sol currency.

Alejandro Arevalo, emerging market debt manager at Jupiter Asset Management, said investors were used to political volatility in Peru after years of turmoil but some of Castillo's policies were "pretty scary" for the market.

"He's talking about nationalization, about the government taking control of the economy ... so it's something that could bring significant volatility to the market."

The sol currency initially fell but recovered to be up 0.1% against the dollar for the day. Stocks and bonds dipped.

Amid a crowded pack of candidates, Castillo had tapped in to public anger which has been fired up in Peru over the last year.

The economy crashed its hardest in three decades in 2020 as the pandemic hammered the major copper-producing nation. Tough lockdowns failed to stem the spread of COVID-19, with Peru one of the hardest hit in the world per-capita.

Meanwhile, politicians have come under fire. President Martin Vizcarra, who had been popular, was impeached by Congress last year over allegations of corruption. His successor resigned shortly after, following deadly street protests, when many called for an overhaul of the political class.

Voter Jessica JimÃ©nez said she did not support Fujimori, but thought that Castillo posed a "danger" to the country.

Jhony Paucar said he did not agree with most of Castillo's policies but thought that Peru needed a sharp new direction.

"We are tired of so much corruption and the same way of governing, it's time for Peru to change," he said. "I don't agree so much with Castillo for what he says but I think this is a clear rebuke from Peruvians - we are outraged with corruption."