In Honduras, parties flag fears of fraud ahead of pivotal vote 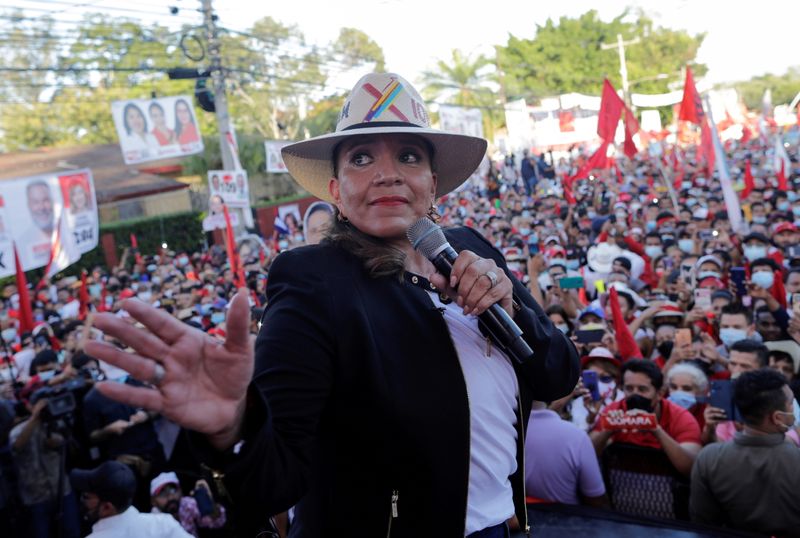 TEGUCIGALPA (Reuters) - Warnings of potential foul play are flying from all sides ahead of Sunday's presidential election in Honduras, raising fears of possible disputes and unrest if leading challenger Xiomara Castro does not win by a clear margin.

The charged political atmosphere reflects memories of the disputed 2017 election, which the ruling National Party won after a delayed count and that the Organization of American States said was riddled with irregularities before calling for a fresh vote.

The opposition said the result was fraudulent and both sides claimed victory. More than two dozen people were killed in the ensuing riots and repression.

The current election cycle has already claimed more political violence than four years ago, with more than 30 killed so far, according to researchers at Honduras' national university.

Salvador Nasralla, the 2017 runner-up, is the current candidate for vice president for the leading opposition slate led by self-declared democratic socialist Castro. He accuses the National Party of planning a repeat of what he said was voter suppression in 2017.

"I don't have any confidence in our electoral process," he told Reuters.

This week, the party itself issued a statement blasting the electoral authority for already committing errors including a lack of transparency that could lead to a "national crisis" with delayed and suspect results.

"It creates a situation of high risk to the election," it said.

In a sign of concerns in the final week before the election, the administration of U.S. President Joe Biden took the unusual step of sending a high-level delegation to meet with the main candidates, government officials and election organizers.

After the visit, a senior U.S. State Department official said the main objective of the delegation was to encourage a fair, free and peaceful election, given what it describes as democratic backsliding in the region.

If poll leader Castro wins, she would bring the Honduran left to power for the first time since her husband, former President Manuel Zelaya, was ousted in a 2009 coup.

If ruling party candidate Nasry Asfura prevails, he will have overcome the unpopularity of outgoing President Juan Orlando Hernandez, who is fighting accusations of corruption and links to drug smugglers.

A LOOK AT THE CANDIDATE'S PHONE

During an interview, Nasralla showed Reuters a video on his phone he said was captured by his home-security cameras a few days ago. It showed someone painting slurs on a wall of his house. In the video, the person can be seen removing an outer layer of clothing to reveal a shirt bearing the logo of Castro's Libre party underneath.

Nasralla said the video was evidence that National Party agitators were disguising themselves as Libre supporters, and worried they will provoke violence or property destruction to erode opposition votes.

"They're the ones that cause violence," he said.

The National Party did not immediately respond to a request for comment.

On Friday, a handful of businesses in the capital Tegucigalpa covered glass store entrances with wood and metal panels, in a sign some were taking the possibility of unrest seriously.

Rixi Moncada, the Libre Party's representative on the electoral council, said the government and the National Party have caused "a lot of obstruction" in its efforts to organize a fair vote.

She specifically accused the finance ministry of interfering with the council's budget and causing delayed deliveries of polling station equipment, like printers and finger-print readers.

Moncada, a lawyer, expressed concern that any post-election dispute might reach the courts, widely seen as loyal to the ruling party.

"This country has very little faith in our system of justice," she said.