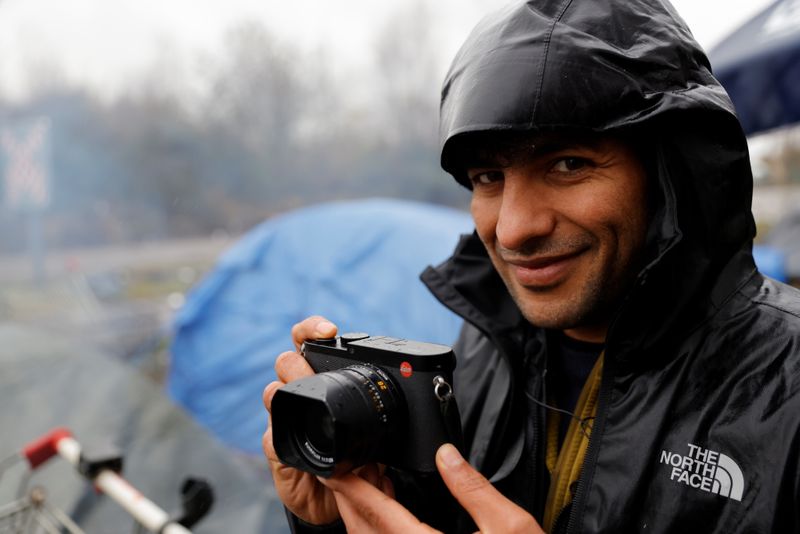 Afghan refugee and photographer Abdul Saboor poses for Reuters as he takes pictures in a makeshifts migrant camp in Loon-Plage, near Dunkirk, France, December 4, 2021. REUTERS/Pascal Rossignol

LOON-PLAGE, France (Reuters) - Afghan refugee Abdul Saboor began photographing the lives of migrants as he made his own arduous journey to Western Europe, determined to portray the hardship of being uprooted and cast into the unknown.

Saboor, 29, said he was hounded out of Afghanistan by Taliban insurgents in 2015 and spent two years making his way to Europe. He captured his first images on a mobile phone before a charity later gave him a camera.

"There was no one to photograph, to document what was happening," he told Reuters. "I decided to be a witness of our journey and show to the world, show to the people how difficult it is when you leave your home."

Saboor has been a photographer ever since. He spends much of his time in the makeshift camps in northern France where migrants fleeing war, poverty and persecution in Africa and the Middle East often hunker down before trying to reach Britain.

It was from the Channel shores of northern France that the 27 migrants who drowned while attempting to cross the Channel in an inflatable dinghy last month had set off.

"I know how difficult it is when you leave all your dreams behind," Saboor, who trained as a mechanical engineer in his homeland, said in Loon-Plage, a coastal town 20 km (12 miles) east of Calais where many of the migrant camps are situated.

But dreams can be reborn.

Saboor has been granted refugee states in France, and he now divides his time between Paris, Toulouse, where he teaches at an art school, and Calais, working for international media houses.

This week, some of Saboor's images were screened at an event at a cultural bar in Paris where artists and journalists present their works. Curator Yael Caux said Saboor's own experience lends a rare empathy to his images.

Saboor's next ambition is to return to the Afghan border, where his exile started, and capture shots of those starting out on their own new journey.