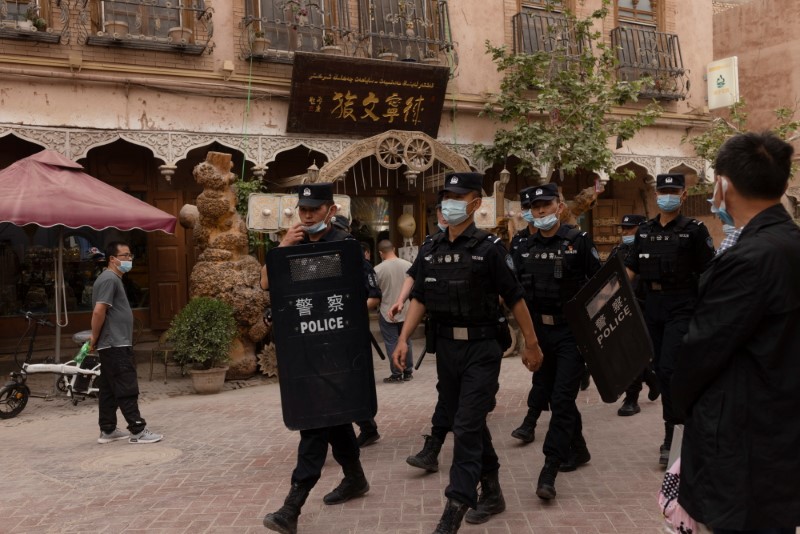 By Cate Cadell and Thomas Peter

Tourists smiled and posed in traditional dress on camels for photographs amid billboards extolling the ruling Communist Party.

China is trying to move on from a security crackdown in Xinjiang in which more than a million ethnic Uyghurs were detained in re-education centres since 2016, according to U.N. experts and researchers â part of what Beijing has described as an effort to eradicate extremism.

It wants to build a patriotic, multi-ethnic region that is secular, mandarin-speaking and attractive to domestic tourists who spend trillions of yuan a year on group tours and curated experiences.

Although Beijing says reporters are able to travel freely in Xinjiang, during a recent two-week reporting trip to the region by Reuters two journalists were tailed by a rotating cohort of plain-clothed minders who were rarely out of sight, day and night.

The team was unable to establish who the individuals were; they walked away when approached and did not respond when addressed.

Within an hour of the reporters leaving their hotel in the city of Kashgar through a back gate, barbed wire was erected across the exit and fire escapes on their floor were locked.

Upon arrival in Urumqi, Xinjiang's capital, uniformed police entered the plane and escorted the reporters onto the tarmac in front of other passengers. They photographed the reporters' credentials and recorded information including the hotel they planned to stay in.

China's foreign ministry and the regional government in Xinjiang did not respond to requests for comment on the specific security measures or on their ambitions for tourism in the region.

"Regarding foreign journalists' coverage in Xinjiang, China has always maintained an open and welcome attitude," it said in a statement, adding that journalists must strictly abide by Chinese law in the region.

Some new attractions in southern Xinjiang are just a short drive away from the camps and prisons built to service Beijing's anti-extremism drive.

In the city of Kashgar, as Uyghur musicians serenaded tourists from the balcony of a picturesque tea shop, around a dozen police carrying shields and batons emerged from surrounding alleyways in an afternoon shift change.

In the city streets and countryside of Xinjiang, Communist Party propaganda urges loyalty and ethnic unity.

Billboards show President Xi Jinping standing among a crowd of smiling Uyghur children. Murals on the walls of houses in one small village outside Hotan warn against the evils of extremism and depict happy mixed Uyghur and Han families.

"Build ethnic unity, build a Chinese life, build a better Xinjiang," read a banner in a residential building in Urumqi.

"Eternally strengthen every ethnic group's approval of the motherland," read another on a mosque wall in Changji city.

The tourist drive is mostly targeted at domestic travellers, offering Xinjiang a new revenue source amid U.S. sanctions. China expects more than 200 million visitors to Xinjiang this year and 400 million by 2025, from 158 million last year.

The U.S. government has imposed sanctions on Chinese officials after accusing China of committing what amounts to genocide in Xinjiang in recent years, citing the internment programme, forced sterilisations and mass labour transfers.

Beijing denies accusations of genocide, and says its policies in Xinjiang were necessary to stamp out separatists and religious extremists who plotted attacks and stirred up tensions between Uyghurs and Han, China's largest ethnic group.

In Hotan, a majority-Uyghur prefecture heavily impacted by the internment programmes, a new "old city" is under construction.

Every few meters, posters show homes before they were demolished and replaced by buildings in keeping with the architectural style of the tourist developments.

"Old appearance turned into new, feel gratitude for the Communist Party," they read.