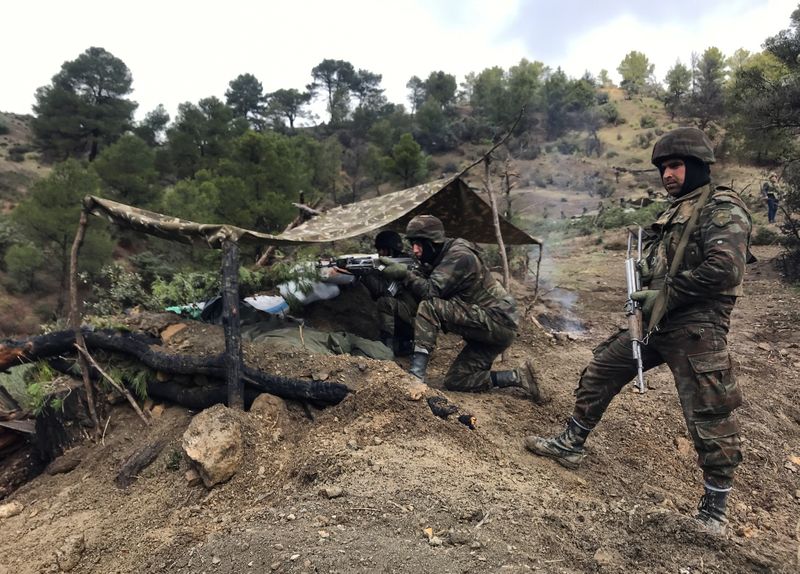 AIN DEFLA, Algeria (Reuters) - Algerian soldiers fired high-calibre rounds into a scrubby hillside of the Ain Defla mountains last week, part of an operation against the persistent threat of Islamist militants after they launched a fresh attack last month.

They stalked in the rain between pine trees along muddy tracks, rifles raised, before dropping into a crouch, many of them too young to remember the 1990s jihadist insurgency that killed 200,000 Algerians.

Two decades after that bloodshed ended, the militant threat in Algeria has mostly been contained. However, al Qaeda and other groups including an Islamic State branch still hold out in some remote areas, mostly in the vast desert border region with Sahel neighbours Mali and Niger.

The operation in Ain Defla was aimed at a small group that the army believed to be hiding in the mountains, about 180 kms (112 miles) west of the capital Algiers.

It had splintered from the Salafist Group for Preaching and Combat, one of Algeria's oldest militant organisations and the forerunner of its al Qaeda franchise, the army said.

Reuters and a local news agency were escorted during the operation by the military.

"Our goal is to fix, surround and liquidate a group of terrorists in this perimeter," said an army captain, calling it a combat mission.

In one place, soldiers sat behind sandbags under a bivouac looking out across a mountain valley, the wind ruffling the camouflage pattern sheet above them.

Large-calibre gunfire rattled out across the landscape. The soldiers were shooting into an area they could not reach.

"These shots are intended to clean areas where terrorists may be hiding," a colonel said.

Algeriaâs main security focus has shifted in recent years from the internal threat that once ran rampant through rural areas and dense cities to borders with unstable neighbours.

"They are small in numbers, so you need to hunt them one by one," a security source said of militant groups still present in Algeria.

Though some militants remain in areas like Ain Defla, the regionâs traditional pastoral life continues.

Lazali Belgacem, an animal herder in a brown hooded robe and yellow turban, said he felt safer than in the past as he led a donkey across a mountainside, his cows walking ahead.

"I used to be very afraid of terrorists. They might kill or kidnap you," he said.

In January, three soldiers and six armed men were killed in clashes in the Tipaza region, between Ain Defla and Algiers.

It was a relatively rare recent episode in a jihadist struggle that has mostly moved into the deep sahara.

Al Qaeda in the Islamic Maghreb (AQIM), the most potent militant group operating in North Africa, has found more room for manouevre in the insurgencies rattling Mali and Niger.

The former AQIM chief Abdelmalek Droukdel was killed in Mali last year. His successor, Algerian Abu Obaida Yusuf al-Annabi, is also thought to be based there.

AQIM, set up in 2007, seeks to replace Algeria's government with sharia rule but has not carried out any big attacks since the 2013 assault on a desert gas plant in which 40 workers and more than 20 militants were killed.

Last year the Defence Ministry said it had killed 21 militants in Algeria. According to constitutional changes approved in a referendum last year, the military will in future be able to operate beyond Algeriaâs borders in some cases.