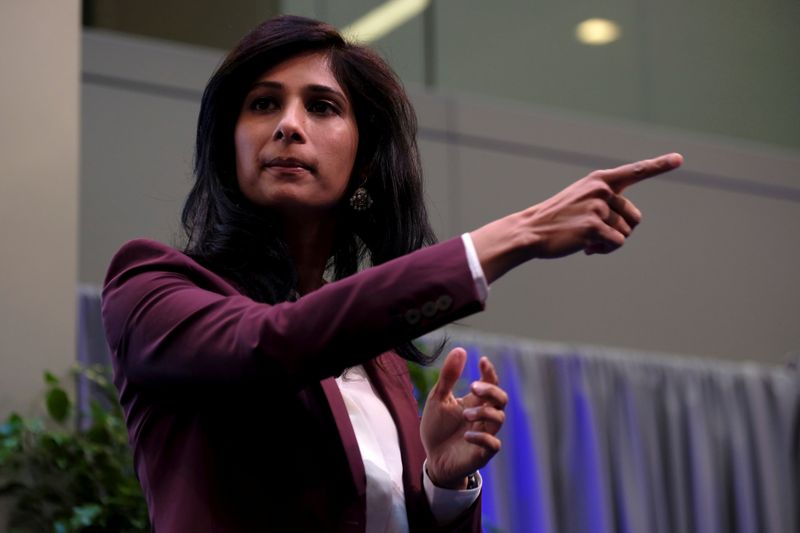 WASHINGTON (Reuters) - The International Monetary Fund takes data integrity "incredibly seriously" and has a robust system to ensure the credibility of its data and forecasts, but is always looking for ways to improve, its chief economist, Gita Gopinath, said on Tuesday.

Gopinath referenced the IMF executive board's expression of full confidence https://www.reuters.com/business/imf-board-resume-debate-over-georgievas-future-later-monday-2021-10-11 in IMF Managing Director Kristalina Georgieva and the impartiality of the IMF's analytical work, following its review of claims that Georgieva pressured World Bank staff to change data to benefit China. Gopinath noted that the data issue in question pertained to the World Bank, not the IMF.

But both the IMF's executive board and the U.S. Treasury https://www.reuters.com/business/yellen-tells-imfs-georgieva-data-rigging-probe-raised-legitimate-concerns-2021-10-12 signaled their interest in additional actions to reinforce data integrity and credibility at the global crisis lender.

"We will be hearing more about this in the coming days, but again, just to be clear, we have a very robust system already at the IMF, in terms of making sure (of) the credibility, the integrity of our data and forecasts," Gopinath told reporters during the IMF and World Bank fall meetings.

"In the case of the IMF, we take data integrity incredibly seriously, which is why we have many processes in place to make sure that our data and forecasts are reviewed carefully by multiple departments, multiple economists," she said.

"We're always looking for ways to improve, so I look forward to seeing what additional steps are mentioned," she added.

U.S. Treasury Secretary Janet Yellen told Georgieva on Monday that the report by law firm WilmerHale on the World Bank data issue "raised legitimate issues and concerns" but said a lack of direct evidence meant a leadership change was not warranted.

Yellen said Treasury would closely monitor the IMF's follow-up and evaluate any new facts or findings, and called for proactive steps to reinforce data integrity and credibility.

The Fund's 24-member board and Treasury issued separate lengthy statements after a week of marathon meetings over Georgieva's actions as World Bank CEO that threw into question her continued leadership of the IMF.

Georgieva, a Bulgarian economist and the first person from a developing country to head the fund, had vehemently denied the claims, which date back to 2017. She took over the top IMF job in October 2019.

The WilmerHale report https://thedocs.worldbank.org/en/doc/84a922cc9273b7b120d49ad3b9e9d3f9-0090012021/original/DB-Investigation-Findings-and-Report-to-the-Board-of-Executive-Directors-September-15-2021.pdf alleged that Georgieva and other senior officials applied "undue pressure" on bank staff to make changes to boost China's ranking in the "Doing Business" report, just as the bank was seeking Beijing's support for a major capital increase.

A senior Treasury official said the WilmerHale report raised significant concerns, and U.S. officials were keeping close tabs on separate reviews under way at the IMF and the World Bank.

The law firm also claimed that World Bank staff altered data in 2019 to boost Saudi Arabia's ranking in the "Doing Business" report, but said it found no evidence of involvement by the bank's Office of the President or board members.