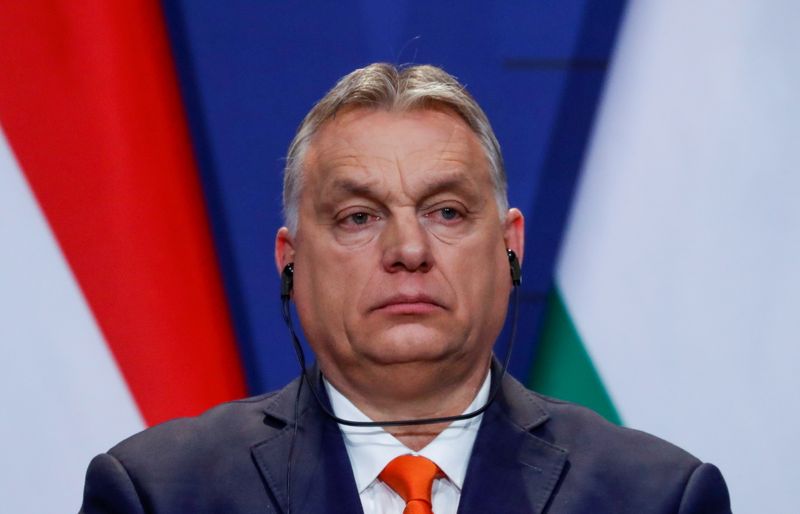 BUDAPEST (Reuters) - Hungary's businesses and services will begin reopening, as it has vaccinated more than a quarter of its 10 million people with at least a first shot, Prime Minister Viktor Orban said on Tuesday.

Orban, who faces an election in a year, is trying to tame the world's deadliest COVID-19 surge and balance that with the need to reopen the economy to avoid a second year of deep recession.

"Today we reached an important milestone," Orban said in a video on Facebook. "For a year we have lived our lives among restrictions, curfews and personal loss.

"In the past month we increased vaccinations 2.5 times, so from tomorrow on, shops can reopen and services can restart. There will still be pandemic rules, please respect them."

Hungary has had the highest weekly per capita fatalities in the world for several weeks, according to Johns Hopkins University data.

Its health care system has come under extreme stress, the government has said, despite vaccinating a fifth of the population in one of the fastest inoculation drives in Europe.

There were about 12,000 coronavirus patients in hospital on Monday, more than 1,400 of them on ventilators, the government said on Tuesday.

The government has also vaccinated among the most citizens per capita in the European Union and imported the EU's highest number of vaccine doses per capita, aiding a rapid inoculation drive.

For now the reopening will not affect schools, which will reopen on April 17. Hotels also will stay closed, as will restaurants, which can open only for takeout or delivery, according to the new rules.

Doctors have warned that a hasty reopening would be premature.

Janos Szlavik, the leading infection specialist at a Budapest COVID hospital, told private broadcaster Hir TV that "the country is far from a vaccination rate that allows reopening... herd immunity would be somewhere around 6-7 million people."

The head of the country's top medical school, Bela Merkely, told the newscast at RTL Klub that the 2.5 million mark was a good target but 5 million would be the level that means safety for everyone.