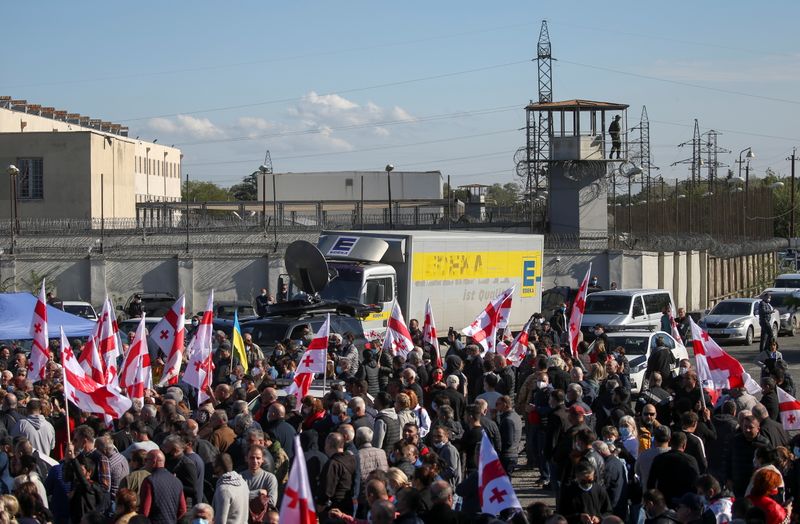 Supporters of Georgian ex-president Mikheil Saakashvili, who called for post-election street protests and was arrested upon his arrival in Georgia despite facing imprisonment, hold a rally near a jail in Rustavi, Georgia October 4, 2021. REUTERS/Irakli Ge

RUSTAVI, Georgia (Reuters) -Hundreds of Georgians rallied on Monday to demand the release of hunger-striking ex-president Mikheil Saakashvili, who was jailed last week after returning from exile and calling for post-election protests.

Saakashvili, who was sentenced in absentia in Georgia in 2018 for abuse of power and concealing evidence when he was president - charges he called politically motivated, secretly returned home ahead of last weekend's municipal elections after years abroad. He was arrested on Friday.

It is not fully clear how the 53-year-old, pro-Western politician came back but investigating prosecutors have charged two men for driving him from the Georgian port of Poti to a village on Sept. 29, Interfax news agency reported.

Saakashvili plans to keep up the hunger strike he declared the evening of his arrest until he is freed, TASS news agency cited his lawyer as saying.

Georgia's president and government have made clear they have no plan to pardon or release him.

Some of Saakahsvili's supporters from the United National Movement party he founded gathered outside the prison holding him in the town of Rustavi, southeast of the capital, on Monday.

They waved flags and chanted his nickname "Misha, Misha!"

The politician who led the Rose Revolution in 2003 that ended the presidency of Eduard Shevardnadze is a figurehead for some in the opposition, but derided as a clown by detractors in the ruling Georgian Dream party.

Georgian Dream won 46.7% at the municipal elections over the weekend, compared with 30.7% for the party founded by Saakashvili, according to results released on Sunday with most votes counted.