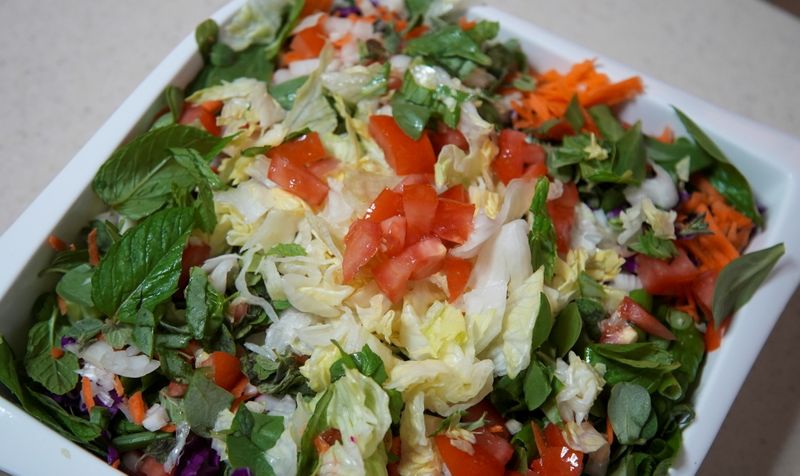 A plate of Fattoush, a popular salad, is seen at Hala Sheikh's house in Beirut, Lebanon April 13, 2021. REUTERS/Issam Abdallah

BEIRUT (Reuters) - After a year of economic meltdown in Lebanon, Hala Sheikh is sticking to a modest menu as she prepares the evening meal for her family to break their daily Ramadan fast.

Even the humble fattoush, a popular salad that she prepares for dinner, has tripled in cost since last year, leaving millions of Lebanese struggling to put food on the table in the Muslim holy month which is usually a time of celebration.

"We didn't want to prepare unnecessary stuff," Sheikh said as she got ready for the first Ramadan meal this week. "We prepared basic things like fattoush, soup and a main course - we will not prepare big meals like last year or the year before."

A study by the American University of Beirut (AUB), dubbed the "Fattoush Index", found that the cost of its ingredients - including lettuce, tomatoes, cucumber, parsley, radish and bread - soared 210% in the last 12 months.

For Sheikh, a 50-year-old former nutritionist who moved from the United States with her family, prices are a constant concern.

"During this bad economic situation you have to bear in mind the cost of making fattoush," she said as she prepared the salad in her flat in Beirut's Hamra district where she lives with her husband and four sons.

"This lettuce Iâm cutting costs 3,000 pounds." After the currency slumped 85%, that is worth barely 20 U.S. cents. But in a country where the minimum wage has plunged to around $50 a month, costs quickly spiral.

AUB professor Nasser Yassine said that over the full month of Ramadan the cost of providing the fast-breaking Iftar meal for a family of five had risen to 1.5 million Lebanese pounds, more than double the monthly minimum wage.

It will be hard "for poor families who are below the poverty line and it will also be hard for them to secure and maintain their daily food," he said.

Yassine's Fattoush Index may even under-estimate the scale of the problem, with official consumer price data showing the cost of food and non-alcoholic drinks jumped 417% in the year to February.

The runaway inflation is part of a broader economic collapse over the last two years which is fuelling hunger and unrest, in the country's gravest crisis since its 1975-1990 civil war.

After decades of mismanagement and corruption, Lebanon's leaders have failed to break their political deadlock and form a new government to tackle the crisis, which has only worsened with the impact of the coronavirus pandemic and a devastating explosion at Beirut's port in August.

"We witnessed many wars, civil war and the Israeli invasion," Sheikh said. "But this is the worst Ramadan we have ever been through."