'How to end a war you didn't win': Yemen's Houthis seek Saudi concessions 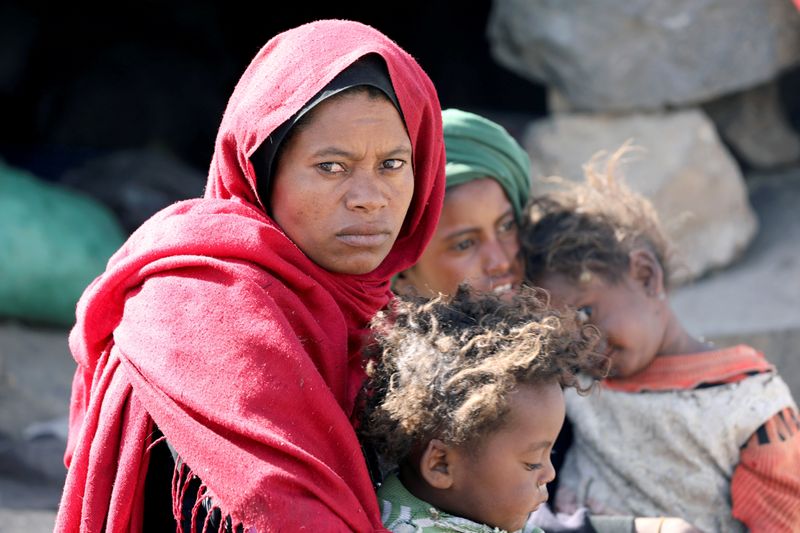 FILE PHOTO: A woman looks as she sits with her children at a camp for internally displaced people on the outskirts of Sanaa, Yemen March 1, 2021. REUTERS/Khaled Abdullah/File Photo

DUBAI (Reuters) - Yemen's Houthis say a U.S. plan for a ceasefire in their six-year war against a Saudi-led military coalition does not go far enough, and are ramping up pressure on Riyadh to lift a sea and air blockade before any truce deal is agreed.

With the United Nations warning of a looming large-scale famine, U.S. special envoy on Yemen Tim Lenderking toured the region this month to press the warring sides to agree a nationwide truce to revive U.N.-sponsored peace talks on ending the conflict.

But making clear the Houthis believed the plan must go further, Chief Houthi negotiator Mohammed Abdulsalam told Reuters: "We have discussed all these proposals and offered alternatives. We continue to talk."

Saudi Arabia, which leads a military coalition that intervened in Yemen in March 2015, has been trying for over a year to exit the war but wants more assurances from the armed Houthi movement on the security of its borders and on curbing the influence of its rival, Iran, in Yemen.

A main sticking point is the Houthi demand that the coalition lift the blockade - which has largely contributed to Yemen suffering the world's worst humanitarian crisis - before any truce deal is agreed, three sources involved in the talks said.

The Saudi-led coalition controls Yemen's airspace and waters, including off the Houthi-held Hodeidah port on the Red Sea which handles more than 70% of Yemen's imports. The Houthis hold most of northern Yemen, including the capital Sanaa.

"The issue is seen as an existential threat in Saudi Arabia. Free shipping and daily flights between northern Yemen and Iran would cause real anxiety in Riyadh," said a source familiar with the talks. "It is a case study on how to end a war that you didn't win."

Lenderking has not provided details in public of what he called a "sound plan". But Abdulsalam said it included allowing flights to Sanaa airport from some destinations with prior coalition authorisation.

He said the Houthis agreed to inspection of ships heading to Hodeidah and verification of bank transfers and goods' origins, but that the coalition says port revenues must go to Yemen's Saudi-backed government.

A U.S. State Department spokesperson said Lenderking has presented a fair proposal for a nationwide ceasefire, with elements that would immediately address Yemenâs dire humanitarian situation.

"The Houthis must demonstrate their willingness to adopt and adhere to a comprehensive, nationwide ceasefire and enter negotiations," the spokesperson said.

DEVIL IN THE DETAILS

The challenge, the sources and analysts said, is finding middle ground.

"From what I understand, the Saudis are willing to make concessions," said Peter Salisbury, a senior analyst at International Crisis Group. "But there is a lot of devil in the details to be worked out, in terms of what a ceasefire looks like and what an easing of restrictions looks like."

The stakes are high as the Houthis step up missile and drone attacks on Saudi Arabia, including on oil facilities, and make gains in an offensive to take Yemen's gas-rich Marib region, the last stronghold of the internationally recognised government that the Houthis ousted from power in Sanaa.

Biden has said the United States will no longer support offensive operations by the coalition while continuing to help Saudi Arabia defend itself.

"I think the military escalation in Marib and elsewhere shows that Iran wants to pressure the U.S. indirectly on the nuclear file, I do not see another reason for it," a Saudi official, who declined to be named, said.

Iran's foreign ministry spokesman said this month that Tehran supports a truce in Yemen "with lifting of the blockade".

Biden aims to restore a 2015 international nuclear pact with Iran that his predecessor Donald Trump quit in 2018, but Washington and Tehran cannot agree on who should move first.

The Biden administration has used a carrot and stick approach on Yemen, including lifting terrorist designations on the Houthis imposed by the Trump administration and later sanctioning two of the group's military leaders.

Lenderking has said Washington will work with the Yemeni and Saudi governments to find a way to deliver fuel to Yemenis and restore humanitarian aid funding for the north.

But time is running out. Fuel shortages have knocked out water pumps, generators in hospitals and disrupted aid supplies in a country where 80% of the population need help.

U.N. special envoy Martin Griffiths said on Tuesday that no fuel imports had been permitted to enter Hodeidah since January.

As of March 17, at least 13 fuel tankers were held -- some for more than six months -- by coalition warships off Hodeidah despite them having U.N clearance, U.N. data showed.

Four ships cancelled and left without docking at the port after waiting for months.