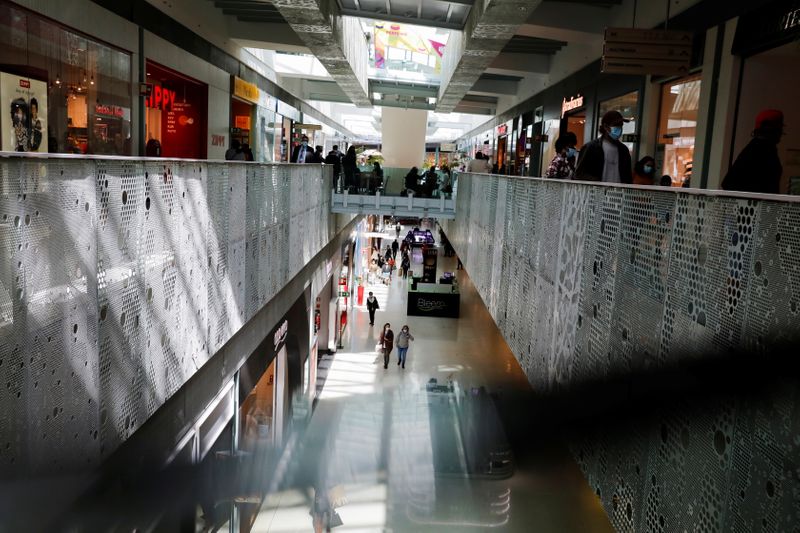 People are seen in a shopping mall on the first day of the opening of malls after a country lockdown, amid the coronavirus disease (COVID-19) pandemic, in Sintra, Portugal, April 19, 2021. REUTERS/Pedro Nunes

By Catarina Demony and Miguel Pereira

LISBON (Reuters) - Three months after Joao Correia was forced to shut his cafe in one of Lisbon's shopping malls, he welcomed customers back on Monday, feeling both cautious and hopeful about the future.

Portugal imposed a second national lockdown in January to stem what was then the world's worst COVID-19 surge. A nation of just over 10 million, it has recorded over 830,000 cases and close to 17,000 deaths from the virus.

Strict rules have been gradually relaxed since mid-March when hair salons, bookshops and some schools reopened.

Two weeks later, food terraces, museums, markets, fairs, small shops and gyms were allowed to open doors. On Monday, it was the turn of shopping centres like the Amoreiras mall in Lisbon, where Correia has worked for over three decades.

"I was anxiously waiting for this ... it's a joy to get to this day," he said. "We made no cash for three months and now, step by step, we have to recover."

Cinemas, high schools, universities and indoor areas of restaurants were also given the green light to reopen on Monday in most of Portugal.

The Amoreiras has more than 200 stores and its director Fernando Oliveira said the impact of lockdown on businesses was "brutal".

"During the first lockdown it was a shock to see dark corridors, with no people, stores closed," Oliveira said as eager customers queued outside shops on Monday. "It wasn't such a big shock this time but it was still very hard."

No crisis in recent history has hit Portugal's tourism-dependent economy as hard as the pandemic, with GDP shrinking 7.6% last year, its biggest slump since 1936.

The economic recovery depends on the vaccine rollout, which has so far been slow, as well as the return of tourists, especially from one of the country's biggest markets, Britain.

As things stand, Britons are not allowed to travel abroad except for a limited set of government-approved essential reasons. Travel may be allowed to resume from May 17, but the British government has not confirmed that.

"Airplanes don't take off so passengers don't land and don't come to our restaurant," Fernandes said, adding he only expects his business to fully recover in 2023. "If everything goes well, 2021 is just the beginning."