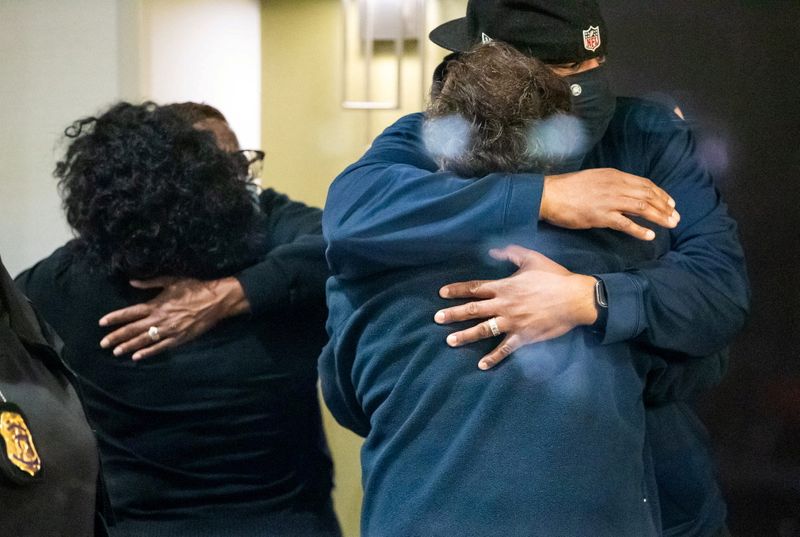 FILE PHOTO: People embrace after learning that their loved one was safe after a mass casualty shooting at the FedEx facility in Indianapolis, Indiana, U.S. April 16, 2021. Mykal McEldowney/IndyStar/USA Today Network via REUTERS

(Reuters) - The young gunman who killed eight workers at an Indianapolis FedEx facility before taking his own life legally bought the two semiautomatic rifles he used during last week's massacre months after he had been in psychiatric detention, police said.

A trace by the U.S. Bureau of Alcohol, Tobacco, Firearms and Explosives turned up the two legal purchases last July and September by Brandon Hole, 19, a former employee at the facility, the Indianapolis Metropolitan Police Department said on Saturday.

An IMDB spokesman on Sunday said the department was not disclosing where the guns were bought.

The purchases were made a few months after Hole was briefly placed under psychiatric detention in March and a shotgun was seized from his home when his mother contacted law enforcement to report he might try to commit "suicide by cop," according to the FBI.

Based on items seen in his bedroom at that time, Hole was interviewed in April, but the FBI agents found no criminal violation and determined that he had no "racially motivated violent extremism ideology," Paul Keenan, special agent in charge of the FBI's Indianapolis field office, said on Friday.

The attack on Thursday in Indiana's state capital, the third most populous city in the Midwest, was the latest in a spate of deadly mass shootings in the United States over the past month.

Police are still investigating what motivated Hole to open fire. Four members of the Sikh religious community - three women and a man - were among the eight people killed.

The New York-based Sikh Coalition, a civil rights advocacy group, has called for a full investigation into "the possibility of bias as factor" in the FedEx killings.