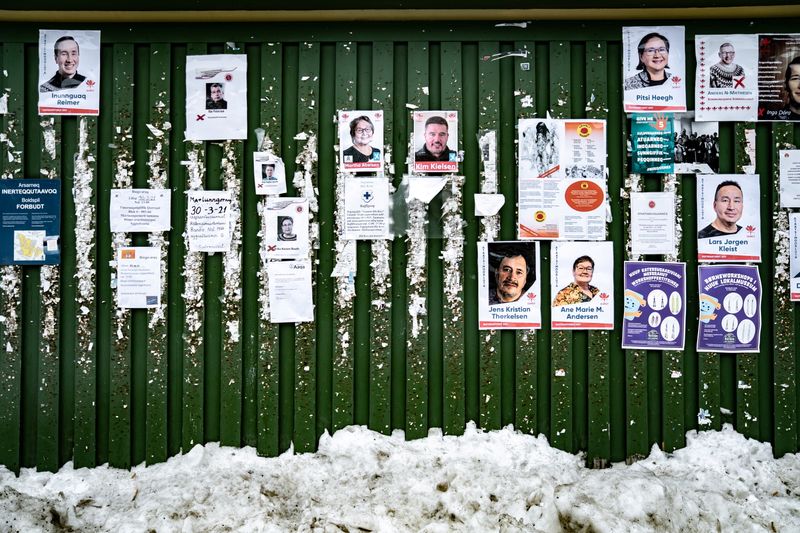 Electoral posters are displayed ahead of the April 6 parliamentary election, in Nuuk, Greenland March 30, 2021. Ritzau Scanpix/Emil Helms via REUTERS

COPENHAGEN (Reuters) - Greenland holds an election next week that could decide the fate of vast deposits of rare earth metals which international companies want to exploit and are vital to the Arctic island's hopes of economic recovery and independence.

The government called the April 6 snap parliamentary poll after a junior coalition partner quit in a dispute caused by growing public concern over the potential impact of a big mining project on Greenland's pristine environment.

Though Greenland is home to just over 56,000 people, the fallout from the election will be felt far beyond its borders because it has what the U.S. Geological Survey says are the world's biggest undeveloped deposits of rare earth metals.

As climate change and melting ice make access to the Arctic cheaper, international mining companies are racing for the right to exploit these deposits, which include neodymium, used in wind turbines, electric vehicles and combat aircraft.

But opinion polls show the biggest party in the next parliament could be Inuit Ataqatigiit (IA), which opposes the major rare earth mining project at Kvanefjeld in southern Greenland because the site also contains radioactive materials.

If IA can form a coalition, it is possible that the project will be halted or delayed, with potential repercussions for global mining investors.

Acting Minister of Resources Vittus Qujaukitsoq has warned that if Greenland backtracks now, it could scare mining investors away, and "the credibility of the whole country is at stake."

"If we don't attract capital and create new jobs, I'm not sure what the future looks like for our country," Jess Berthelsen, head of Greenland's biggest labour union SIK, told Reuters.

An economic revival is also widely seen as vital for the prospects of greater independence in Greenland, which former U.S. President Donald Trump offered to buy in 2019 and hosts a U.S. air base.

A self-governing territory of the Kingdom of Denmark with a gross domestic product of only around $3 billion, Greenland has a population that mostly relies on fishing and grants from Copenhagen.

Though it has broad autonomy, the island's government leaves foreign, monetary and defence policy to Copenhagen.

The Kvanefjeld project has been debated for years. Support from Prime Minister Kim Kielsen and his governing Siumut party helped license-holder Greenland Minerals gain preliminary approval for the project last year, paving the way for a public hearing.

But when Kielsen was ousted as party chief in December, new leader Erik Jensen - a candidate to become prime minister - cast doubt on support for the project.

Protests erupted when public hearings started in February. At one meeting in Narsaq near the deposit, people inside and outside the hall banged windows and played loud music to disrupt presentations.

"The mine will destroy everything," said Jens Davidsen, a fisherman in Narsaq who can see the Kvanefjeld mountain top from his kitchen window. "We are afraid dust from the mine will hurt our fishing grounds and drinking water."

The small Demokraatit party quit the coalition in early February as opposition to the project mounted.

If IA wins power and delays the project, "they will face the challenge of having to explain to the global mining industry that Greenland actually wants mining, and that it is only this particular project that is problematic," said Rasmus Leander Nielsen, assistant professor at the University of Greenland.