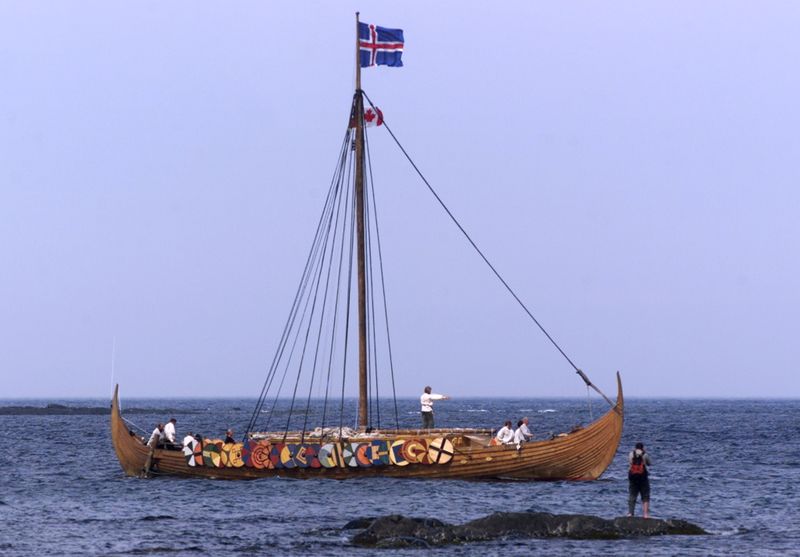 FILE PHOTO: A tourist (R) photographs the Viking replica ship the Islendingur as it arrives in the fishing village of L'Anse aux Meadows in Newfoundland July 28, 2000. REUTERS

(Reuters) - Long before Columbus crossed the Atlantic, eight timber-framed buildings covered in sod stood on a terrace above a peat bog and stream at the northern tip of Canada's island of Newfoundland, evidence that the Vikings had reached the New World first.

But precisely when the Vikings journeyed to establish the L'Anse aux Meadows settlement had remained unclear - until now.

Scientists on Wednesday said a new type of dating technique using a long-ago solar storm as a reference point revealed that the settlement was occupied in 1021 AD, exactly a millennium ago and 471 years before the first voyage of Columbus. The technique was used on three pieces of wood cut for the settlement, all pointing to the same year.

The Viking voyage represents multiple milestones for humankind. The settlement offers the earliest-known evidence of a transatlantic crossing. It also marks the place where the globe was finally encircled by humans, who thousands of years earlier had trekked into North America over a land bridge that once connected Siberia to Alaska.

"Much kudos should go to these northern Europeans for being the first human society to traverse the Atlantic," said geoscientist Michael Dee of the University of Groningen in the Netherlands, who led the study published in the journal Nature.

The Vikings, or Norse people, were seafarers with Scandinavian homelands: Norway, Sweden and Denmark. They ventured through Europe, sometimes colonizing and other times trading or raiding. They possessed extraordinary boat-building and navigation skills and established settlements on Iceland and Greenland.

"I think it is fair to describe the trip as both a voyage of discovery and a search for new sources of raw materials," Dee said. "Many archaeologists believe the principal motivation for them seeking out these new territories was to uncover new sources of timber, in particular. It is generally believed they left from Greenland, where wood suitable for construction is extremely rare."

Their wooden vessels, called longboats, were propelled by sail and oars. One surviving example, called the Oseberg ship, is roughly 70 feet (21.6 meters long).

The Viking Age is traditionally defined as 793-1066 AD, presenting a wide range for the timing of the transatlantic crossing. Ordinary radiocarbon dating - determining the age of organic materials by measuring their content of a particular radioactive isotope of carbon - proved too imprecise to date L'Anse aux Meadows, which was discovered in 1960, although there was a general belief it was the 11th century.

The new dating method relies on the fact that solar storms produce a distinctive radiocarbon signal in a tree's annual growth rings. It was known there was a significant solar storm - a burst of high-energy cosmic rays from the sun - in 992 AD.

In all three pieces of wood examined, from three different trees, 29 growth rings were formed after the one that bore evidence of the solar storm, meaning the wood was cut in 1021, said University of Groningen archaeologist Margot Kuitems, the study's first author.

It was not local indigenous people who cut the wood because there is evidence of metal blades, which they did not possess, Dee said.

The length of the occupation remains unclear, though it may have been a decade or less, and perhaps 100 Norse people were present at any given time, Dee said. Their structures resembled Norse buildings on Greenland and Iceland.

Oral histories called the Icelandic Sagas depict a Viking presence in the Americas. Written down centuries later, they describe a leader named Leif Erikson and a settlement called Vinland, as well as violent and peaceful interactions with the local peoples, including capturing slaves.

The 1021 date roughly corresponds to the saga accounts, Dee said, adding: "Thus it begs the question, how much of the rest of the saga adventures are true?"

(Reporting by Will Dunham in Washington, Editing by Rosalba O'Brien)