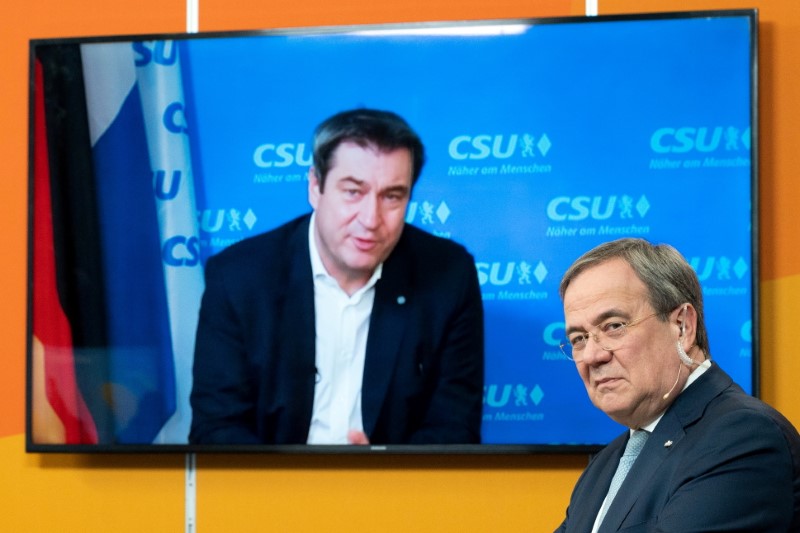 BERLIN (Reuters) - Germany's conservatives plan to rule out tax hikes in their election manifesto, a draft obtained by Reuters showed, aligning them with their preferred liberal coalition partners and distinguishing them from their main rivals.

The conservative alliance of the Christian Democrats (CDU) and Bavarian Christian Social Union (CSU) aims to use its presentation of the manifesto next Monday to widen its lead over the ecologist Greens ahead of a Sept. 26 federal election.

Conservative Chancellor Angela Merkel, in power since 2005, is stepping down after September's election, and senior CDU officials concede privately that it will be tough to retain their party's appeal to voters after 16 years in charge.

The draft showed they also want to abolish a "solidarity tax" - introduced after reunification to support poorer states in eastern Germany - "as soon as possible", and to reduce the number of people who have to pay the top tax rate of 42%.

The opposition Greens as well as the co-governing Social Democrats (SPD) want a moderate rise in the top tax rate, and to ease the burden on small- and medium-income households. Both parties plan a reintroduction of the wealth tax.

SPD Finance Minister Olaf Scholz accused the CDU/CSU of promising tax cuts without explaining how to finance them and blocking steps to facilitate the shift towards renewable energy.

"If the CDU leads the next government, it will cost Germany prosperity," Scholz told ARD broadcaster.

Germany suspended its strict borrowing limits to finance its way through the COVID-19 crisis. While Scholz eyes a return to those limits from 2023, the Greens are in favour of changing the fiscal rules to allow more debt-financed spending.

The conservatives want to mobilise private financing to fund investment, while respecting the limits.

The CDU/CSU draft is not final and consultations on the manifesto are continuing, CDU sources said. If confirmed, the draft would align the conservative bloc with their preferred coalition partner, the business-friendly Free Democrats (FDP).

Polls show the right-leaning parties lack sufficient support now to form a coalition on their own. However, the CDU/CSU bloc has regained and begun extending its lead over the Greens.