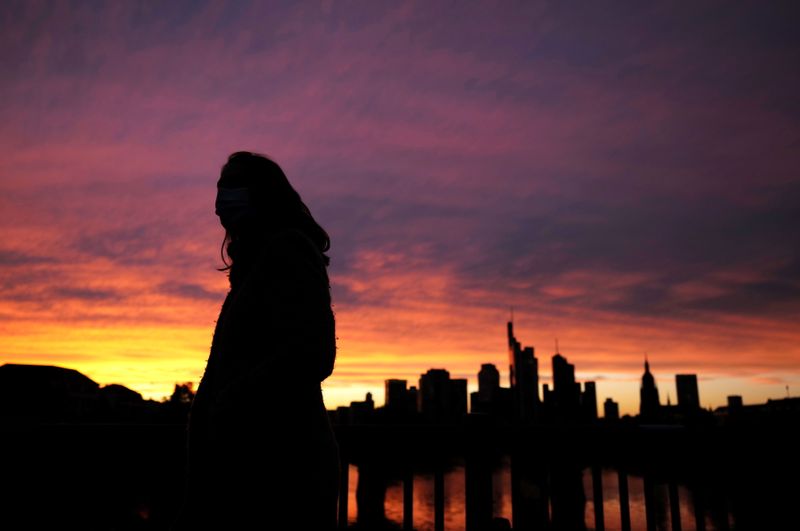 FILE PHOTO: A woman wearing a protective mask walks past the skyline of the financial district during sunset as the spread of the coronavirus disease (COVID-19) continues in Frankfurt, Germany, October 26, 2020, REUTERS/Kai Pfaffenbach/File Photo

BERLIN (Reuters) - Growth in Germany's private sector accelerated slightly in November, but persistent supply bottlenecks in manufacturing continued to weigh on factory output and pushed up inflationary pressures to unprecedented highs, a survey showed on Tuesday.

IHS Markit's flash Germany composite purchasing managers' index rose to 52.8, a two-month high, from 52.0 in October. This was stronger than a Reuters poll of analysts who had predicted a decline to 51.0 in November. A reading above 50 marks growth in activity.

IHS Markit economist Lewis Cooper said the data showed that the slowdown in economic growth seen across Germany's private sector over the previous three months was levelling off.

The services sector showed signs of better growth prospects despite a recent surge in COVID-19 infections, with the services PMI activity index rising to 53.4, a two-month high, from 52.4 in October.

Material shortages and supply chain issues, combined with higher energy and wage bills, led to an unprecedented rate of cost inflation which in turn led many firms to raise their own charges to a record degree, the survey showed.

"This subsequently knocked on to business confidence in November, with sentiment the lowest for over a year as many firms cited concerns around the pandemic, supply problems and price pressures," Cooper said.

The German central bank said on Monday that the economy could stagnate in the final quarter of this year as a lack of goods and labour as well as new restrictions to fight the coronavirus pandemic might put an end to its recent recovery.